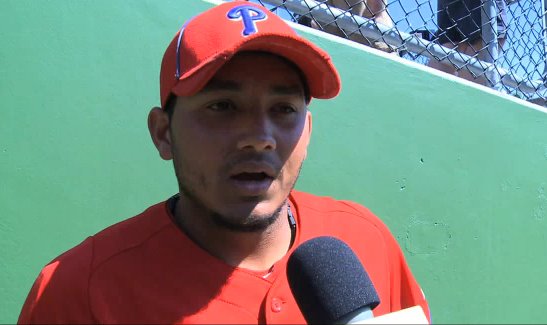 The Phillies got back on the winning track this afternoon, taking a 5-4 win over the Pittsburgh Pirates. The Phillies will play the Pirates five games in a row next week. Two for the On-Deck Series at Citizens Bank Park, and three for season Opener in Pittsburgh.

Today, Cliff Lee was masterful and looked in mid-season shape. He threw six shutout innings, allowing just three hits. He also walked one and struck out three. Lee received run support early on in the game.

In the 1st inning, the Phillies struck first after a Shane Victorino lead off double and an RBI single from Placido Polanco. Jim Thome doubled in Polanco for his fifth RBI of the Spring. The Phillies would not score again until the fourth inning when Brian Schneider knocked in Thome with a single. Schneider has only played 11 Grapefruit League games and has accumulated a .217 batting average.

Things would progress slowly and quietly until the bottom of the 6th inning when Laynce Nix and Pete Orr had back-to-back hits. Nix led off the inning with a double, and Orr followed with a single that knocked Nix in to give the Phillies a 4-0 lead.

After Cliff Lee left after six innings of work, Kyle Kendrick threw a scoreless 7th inning. In the 8th, the Pirates rallied against Antonio Bastardo and Michael Stutes, who allowed three earned runs and one earned run, respectively.

With the game a 4-4 tie headed to the bottom of the 8th, Freddy Galvis fouled a ball off of his foot. Galvis remained in the game for the atbat, but was replaced by Hector Luna in the top of the 9th inning.

The Phillies went on to win the game on a Scott Posednik walkoff home run in the 9th. The Phillies are now 11-13-3 on the Spring with just five Grapefruit League games left.

Back to Freddy Galvis. The Opening Day starting second baseman said that he was OK after taking the ball off of his foot.

Galvis did not get X-rays because the team felt they were unnecessary. He will be evaulated by a team doctor tomorrow.

Let's just hope the Phillies are being honest about this one. I don't know if Pete Orr can be an everyday second baseman.