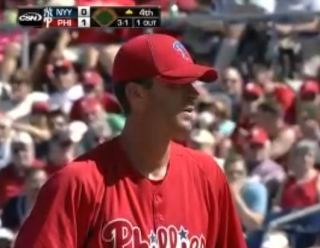 There's always a change of plans for the Phillies' starting pitchers in Spring Training. Usually the regular season starters get four to five starts a Spring. Cole Hamels made his fourth yesterday, and it wasn't the prettiest outing. He allowed five earned runs on eight hits in just 3 1/3 innings. Not pretty.

Today, Scott Elarton (0-1, 4.50 ERA) will make his first start of the Spring. Elarton has appeared in three games and completed 8 innings so far in Grapefruit League games, allowing just four earned runs on five hits. Elarton has not pitched in a Major League game since 2008, but his performances this Spring may give him the chance to get on the Phillies Opening Day roster.

Charlie Manuel will send out his lineup against the Tigers' righty Max Scherzer (1-0, 3.38 ERA), who will be making his fourth start this Spring. He will take on an offense that has been somewhat feeble this Spring. The Phillies only scored two runs in yesterday's 10-2 loss to the Blue Jays.

Along with the news of Utley, the Phillies have also released RHP Joel Pineiro. In just three Grapefruit League games, Pineiro totalled a 0-1 record and a 4.50 ERA. The Phillies recently released Dontrelle Willis and it seems that neither of these veterans do not have the stuff that the Phillies are looking for.

You can watch the game LIVE on TCN this afternoon.