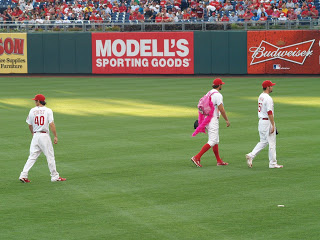 Well, we're getting down to the very end of spring training. The Phillies played today, and they hit well. The problem? They didn't pitch so good. They lost 11-7. Vance Worley had an ugly outing. Raul Valdes and David Herndon both threw two shutout innings though, helping their chances. Hector Luna homered and had three hits. Lou Montanez had a pair of hits and a double. Pence, Ruiz, and Orr doubled from the big club, and Miguel Abreu did too. The box score is here.

All of this has people talking about Hector Luna making the team. Hey, don't rule it out. At the same time, don't expect Joe Thurston to make the team out of camp. I know they signed Thurston today, but he's not going to get the time to make it now. In fact, I think this team's almost set.

I think there's essentially three battles left, for four spots. There's the fifth outfielder and the utility spot left on the bench, and a battle for the last two bullpen slots. That's it. In each of these, there's a favorite. In fact, I think, barring a move (which may still happen), they're close to set.

Not really much changing. Will Podsednik beat out Pierre? Will Luna beat out Orr, or will someone else be signed? Will Valdes beat out Savery? Can Montanez or Kratz surprise us? These are the last of the questions now.
Topics
Uncategorized