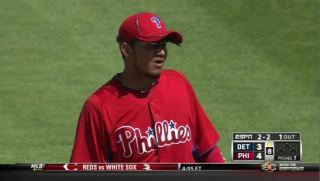 Ok, so I know that basic every Phillies fan had a freak out moment sometime yesterday, and it wasn't over Joel Pineiro's release. I'm going to address the Utley situation first, rationally, then get to the roster.

Chase Utley's knees are shot. They won't get better without surgery, and even then, honestly they might never be good again. This is painful for Phillies fans, as Utley was one of the key faces of our 2008 World Championship, and he was the best second baseman in baseball from 2005-2010. The reality is though, he's not ever going to be that healthy again. While this sounds like an absolute killer for our 2012 hopes, let's look at this with a sober mind for a moment. His 2011 stat-line: .259, .344/.425/.769, 11 HR, 44 RBI's, 14 SB, 21 Doubles, 6 Triples, 398 AB's, 454 PA's, in 103 games. That's not a bad season, but that's no longer an MVP caliber player. He's 33 now. He played well in the playoffs, which is what matters, but he's into his decline now. Again, his knees will not get better, in all likelihood ever. I believe he will have to either DH or play First Base beyond the end of his contract in 2013, if not sooner, and that means that barring a Ryan Howard trade after this season, Chase Utley is likely to not play for the Phillies beyond 2013. None of this is nice, but as someone who watched my childhood heroes, the Dykstras, Daultons, and Kruks of the world get busted up and move on, this is a natural part of the game. Players age, no matter how good they are for you. If the Phillies and Utley are smart, he'll have a future. His future just may not be what we would write in a storybook. I think if they can manage him, get him back out there this year, and win him another ring, we'll all be much better off dealing with this reality. None of this is nice to write. I just think rather than sitting here and thinking of every good scenario about Chase, we need to look at reality, and realize that 2008 is a long time ago. Those players are aging, and our front office must be really smart.

Which leads me to the predicate to talking reality on Chase: this team is not broken, done, finished, out of it, or any other crazy term I heard today. I'm admittedly more worried than I was 24 hours ago, or more fittingly like a week ago. I'm not throwing up the white flag. The 2010 Giants won the World Series with a worse offense than this, and last year they hung in there with a historically bad offense to the final week. It's still more likely than not that Chase and Ryan Howard will play this year, and if the Phillies can hang in the race that long, they'll be fine. Winning 102 games is hard to do again, but this team still has THREE top five Cy Young finishing, All-Star starting pitchers, a top five in the game closer, and a lot of guys with tons of big games under their belt. Don't go giving up on them yet. Also, don't go proposing every single crazy, stupid trade you can think of to get another bat. This team has traded for Joe Blanton (2008), Cliff Lee (2009), Roy Halladay (2010), Roy Oswalt (2010), and Hunter Pence (2011), to name some, at a very, very high cost, and the minor leagues do not have a top 50 prospect right now. Yes, we have about five A-Ball starting pitchers who are very highly touted, and may become top 50's after this season, but trading away them and Dom Brown in the name of every David Wright-esque pipe dream of the fans is stupid. All that does is insure that this team will get even older, quicker, and will see a lot more of the Chase Utley injury variety. Also, remember, we need a few Dom Brown type talents to work out for us here, that's how we got good in the first place. I know he may drive some fans nuts with his concentration issues (catching the ball), but he remains a much higher level talent than a Laynce Nix or a John Mayberry Jr. We have to try and make due with what we have, at least for this very moment.

So this team has to reconsider everything, roster wise. Do they seek every last ounce of offense they can? Ruben seemed to be going the other way today. It seems we'll go with the best defensive team we can. Pitch well, catch the ball, and hope for clutch hitting. It worked for a while last year. I think in the long run, this makes a run at Roy Oswalt later in the year more and more likely. We'll have to pitch, especially since we can't count on Chase and Ryan to carry us.

With all that, here's the roster I see, as of today.

Ok, so some obvious changes. Galvis is now the second baseman. I pushed Wigginton into a pure bench role- mostly because he plays second and third, and I think those will be his main jobs now. I thought about putting Podsednik in as the starting left-fielder, because well, he's better defensively than Nix. I think the winner of the Podsednik/Pierre fight might play more than we thought now. I also think that, in a strange way, it may be more likely that both Pierre and Podsednik make this team today. I also slipped Savery past Diekman, for today. They both pitched well today, but Savery was really good in his two innings.
By the way, they did play and win today, 4-3, and there was a box score here. Victorino doubled and Galvis tripled and plated two.
I'll go ahead and say that I'd probably keep Brown and go for more offense, but the reality is, the Phillies want to limit runs, and this is the best roster to do that. Please, please, please, if you're any kind of serious fan, do not go into total meltdown mode. The 2007 Phillies won the NL East with a lesser roster than this, and 2008 may not have been a lot better. This team has to stay afloat long enough to get healthier, and hopefully the pitching holds up. I think it's safe to say that more rides on Doc, Cliff, and Cole than ever before, and for those of you who had any doubts about Cole Hamels being worth a huge, huge contract, you're about to see why you're wrong.
And with all of that said, don't be overly arrogant. From 2007 to now is a long time. Since the 2008 World Championship to now, they have went backwards a round each year. That the big names of the title run are now breaking down should not shock you at all. The offense has been in a noticeable decline since about mid-May of 2010, and this will not help that. Look, I'll go there, and say that I think Chase Utley's long fly ball late in game 5 of last year would have went over the wall when he was healthier. This team does need to inject some young blood into it. That young blood is Galvis, it's Brown, it's Sebastian Valle, and hopefully more will come. I still think the 2012 Phillies are a playoff team, and probably the World Series favorite when the time comes, but this year just won't be easy. Honestly though, those pennant races in 2007 and 2008 were a lot more fun than the runaways.
Topics
Uncategorized