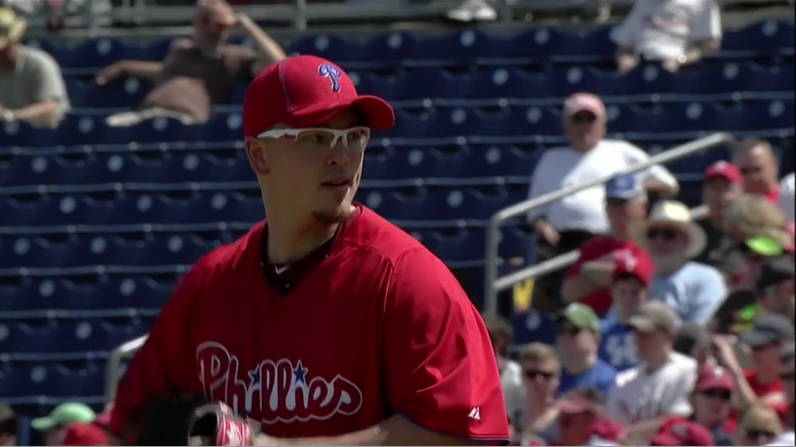 Jimmy Rollins homered, Hector Luna drove in a run, but the highlight of the day was a stellar pitching performance from starter Vance Worley as the Phillies traveled to Bradenton to face the Pittsburgh Pirates.  Worley worked four perfect innings, striking out eight Pirates batters before giving way to Pat Misch in the fifth.

Pirates starter Charlie Morton worked two innings, but was less than perfect, allowing four hits while striking out two.  Though unable to score off of Morton, the Phillies got to Pirates relievers Chris Resop and Tony Watson for a run each.

Worley was relieved by Pat Misch who pitched two hitless, scoreless innings while allowing a walk.
The Pirates first hit came in the seventh with David Herdon on the mound, an infield single by Gorkis Hernandez.  Hernandez scored as Michael Martinez botched a routine ground ball at shortstop for his third error of the preseason.
The Philies scored a third run in the bottom of the seventh on an RBI double by Domonic Brown, who advanced to third on the throw home.  A Kevin Frandsen single through the legs of Pirates non-roster invitee Ryota Igarashi immediately followed for the Phillies' fourth run.
Antonio Bastardo pitched a scoreless 8th, and Michael Schwimer followed with a scoreless 9th for the save.
Meanwhile, at the minor league camp, Jim Thome got his first action.  Check out the posted video of Thome's action and postgame interviews by the Delaware News Journal's David Hale:
The Phillies take on the Astros in Kissimmee tomorrow at 1:05 p.m.
Topics
Uncategorized