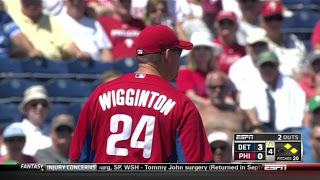 Alright, another day, another injury in Phillies-land. Michael Martinez broke a bone today, and he's out. He has no timetable for return, but you can bet on him starting the year on the DL.

With that great news out of the way, they did play today. Hunter Pence, Ty Wigginton, and Carlos Ruiz all had two hits a piece. Podsednik and Pierre each had a hit, and Podsednik scored a run. Scotty Pod is hitting .389 now, and Pierre is hitting .281. Pete Orr had a hit and an RBI. Mayberry and Galvis both had a hit, with Mayberry getting a double, and Galvis a triple. Erik Kratz had an RBI, as did Orr, Galvis, and Wigginton.

Roy Halladay struck out five over six innings of one run ball. Papelbon had a scoreless inning, as did Stutes and Herndon. Pitching worries? Eh.

The box score is here.

So, here's my projection after today.

I made a number of moves for today that are kind of obvious. Obviously, Martinez joins the DL parade, but less obviously, I put Contreras there. He hasn't thrown in a few days since his last outing, and his last outing was really ugly. It was also his only outing.  My hunch is, he won't be game ready on Opening Day. No worry though. He's obviously progressed, and I'd rather have him right.
So now, the roster changes. None in the line-up and rotation, which is good news. on the bench, I keep the first four spots unchanged, but add Pete Orr in the place of Michael Martinez. His glove's a little better, and so in my view, this may even be an upgrade. I keep Savery as the second lefty, and add Herndon in place of Contreras in the bullpen. The last five off are the same, except for Valdes, who's putting a run on to be the extra lefty.
Don't worry guys. Long season ahead. This is still a really good team.
Topics
Uncategorized