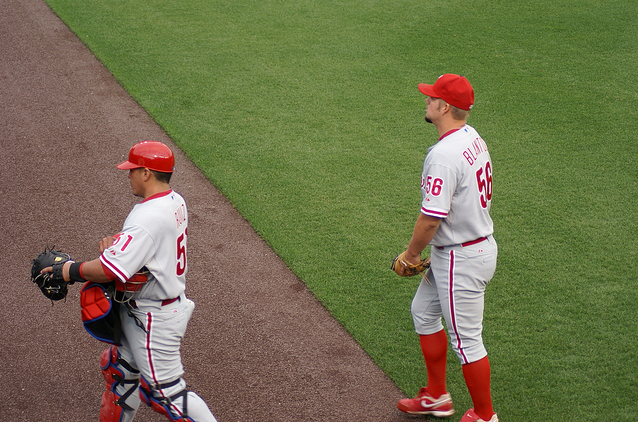 It's going to be a long week with these games starting at 10:15 PM ET. I didn't stay up to see Papelbon close out the 9th inning, but I did stay awake for Doc's outing. Doc was fantastic last night in the Phillies 5-2 win over San Francisco. Doc earned his third win of the season and gave the Phils their 5th win of the season, pulling them to .500 baseball.

Tonight, Joe Blanton (1-1, 2.35 ERA) will make his second start of the year as he takes on the Giants. Blanton was outstanding in his last start. On Thursday, Blanton handled the Marlins with ease as he tossed seven innings of one-run ball, yielding only three hits and a walk while striking out three. Blanton earned the win and lowered his ERA dramatically. Blanton has usually been the odd sheep out of the rotation over the last few years, but if he can remain healthy and look as dead on as he did Thursday, Blanton could end up having a career year. In his career against the Giants, Blanton owns a 2-3 record with a 4.73 ERA.

The Phillies sparked early yesterday as they opened the game with four runs against Tim Lincecum in the first inning. The Phillies' burst from the gates helped them overcome the Giants and win a game with runs. Tonight, they'll be taking on lefty Madison Bumgarner (1-1, 3.97 ERA). Bumgarner earned the win against the Rockies on Thursday as he battled through 7 1/3 IP, 5 1/3 IP of which were no-hit ball. Bumgarner allowed one run on four hits along with two walks and two strike outs. In one career start (8 IP) against the Phils, Bumgarner is 0-1 with a 2.25 ERA.

The Giants must see tons of future potential in Bumgarner. Hell, they signed him to a five-year extension yesterday. The extension is through 2017 with a club/vesting option for 2018 and a club option for 2019. The deal also  covers Bumgarner through his arbitration years and his first year of free agency.

You can watch the game on TV on TCN and MLBNetwork.