Cliff Lee Gives Up Four Runs, Phillies Come Up With 11 Hits, but Fall to Mets 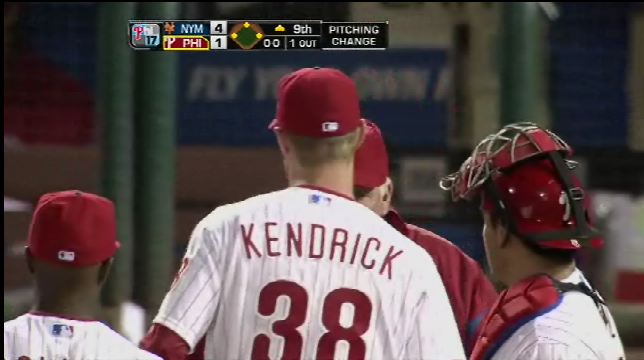 "This Dickey's kinda tricky" mused Gary Matthews in the broadcast booth.  It was either that, or the Phillies offense just did not show up, in any organized fashion.  But, you may have been watching the Flyers' playoff game anyway.  Thanks to a Slingbox, a laptop, and extra cable boxes I got to follow both.

The first inning was not kind to Cliff Lee.   Ruben Tejada greeted Lee with a double, and Daniel Murphy followed with one of his own to give the Mets a 1-0 lead.  After getting the next two batters, Lee gave up a two-run home run to Jason Bay and quickly put the Phillies behind 3-0.

In the fifth inning, Scott Hairston hit a solo shot off of Lee to make it 4-0.

The Phillies entire offensive output was a Freddy Galvis solo home run, depite scattering 10 other hits against Mets pitching.  R.A. Dickey gave up 9 hits in 7 innings of work.  Bobby Parnell gave up the 10th hit but kept the Phils scoreless in the 8th.

It was smooth sailing for Phillies until the 9th, when Kyle Kendrick loaded the bases with no outs.  Kendrick got one out on a ground ball to Placido Polanco, before yielding to Joe Savery.  Savery got a fly ball to left with the bases still loaded for a sacrifice fly, getting the second out.  Savery re-loaded the bases by walking Ronny Cedeño, and then Josh Thole lined out to Mayberry in left.

Mets closer Frank Francisco came in for the bottom of the ninth and after striking out Mayberry, Carlos Ruiz doubled off the center field wall for the Phils' 11th hit.  Freddy Galvis followed Ruiz and struck out for the second out.

Next, pinch-hitter Juan Pierre hit a routine grounder to second baseman Daniel Murphy who watched it roll right between his leg to drive in Ruiz.

Francisco struck out Shane Victorino to end the game and the Phillies fell 5-2.