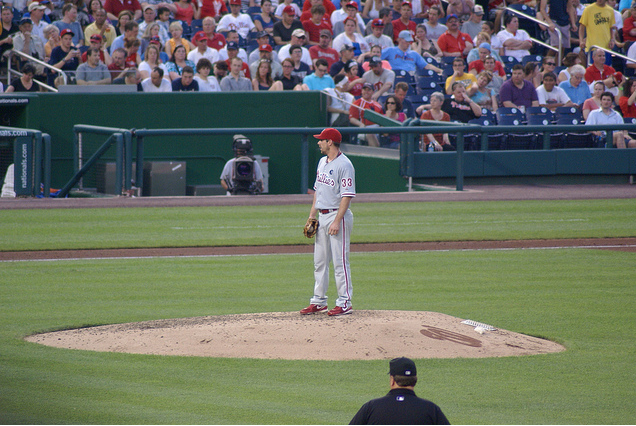 The series is split one a piece thus far. Roy Halladay beat out Tim Lincecum and the Giants 5-2 Monday night while Madison Bumgarner and the Giants' bats beat out Joe Blanton and held the Phillies to just two runs last night. Tonight is the series finale and the Phillies are looking for a win.

They'll turn to lefty Cliff Lee (0-1, 3.46 ERA) to push them through the Giants. In Lee's last start, he wasn't sharp nor was he as dominant as he was in his season debut. He allowed four earned runs on five hits through 7 innings against the Mets on Friday night. Lee took the loss after his offense failed to amount enough runs against R.A. Dickey and the Mets, who held them to just two runs. Lee's location was a bit off, but sometimes you get that kind of game from Lee. Tonight, the Phils hope that Lee can be dead-on accurate and dominant against the Giants, a team he is well familiar with. In four career starts against the Giants, Lee is 4-0 with a 0.82 ERA.

Opposing Lee and the Phils will be righty Matt Cain (1-0, 3.00 ERA). In Cain's last start, he was completely untouchable as he tossed nearly six innings of perfect baseball. The only hit he allowed was a single to Pirates' pitcher James McDonald. Cain would get the complete game one-hit shut out and earn his first win of the season. Coming off that kind of performance as well as coming off of a brand new contract extension worth $127.5 MM over six years can give somebody great confidence. The Phils are hoping to break Cain's confidence tonight and seek a win. In his career against the Phillies, Cain has a 1-4 record with a 4.17 ERA.

Comparing Lee and Cain is neither hard nor easy. Lee has great command when he wants to while topping out around 94 MPH. Cain on the other hand is a hard-throwing righty with devastating breaking pitches. Like Monday's game, tonight looks to be yet another great pitching match up in San Francisco.