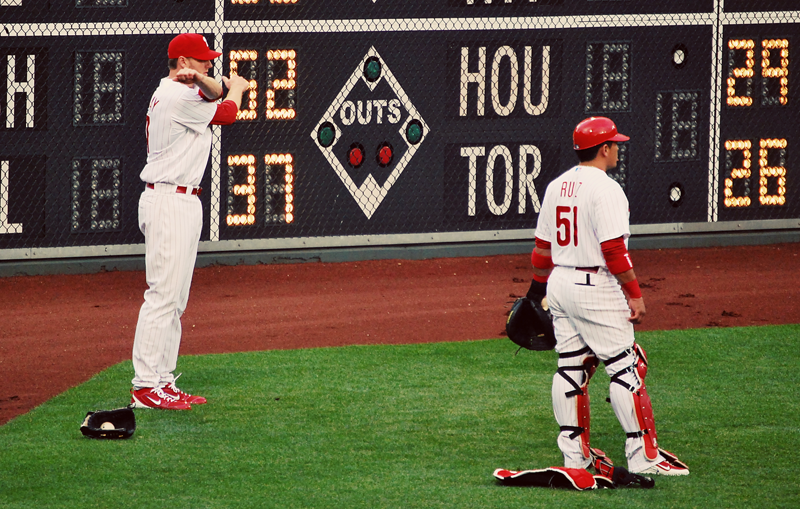 The first time Roy Halladay and Josh Johnson faced off on the mound was May 29, 2010. Roy Halladay threw the 20th perfect game in MLB history against the then-Florida Marlins. Two match ups have followed resulting in two Marlin wins. On June 10, 2010, 12 days after the perfect game, Halladay and Johnson faced off again. Halladay allowed one earned run over 8 innings while Johnson matched, but allowed just four base runners and no runs. Round three between Halladay and Johnson occured on May 10, 2011. Halladay threw a complete game, but he received the loss in the 2-1 defeat. Johnson only allowed a Ryan Howard home run in the second, and finished with 7 innings, receiving a no-decision.

The tale of Doc and JJ has been one that's contested to be a great showdown between two of the game's best pitchers. Tonight, the tale continues as Roy Halladay (1-0, 0.00 ERA) and the Phillies host Josh Johnson (0-1, 4.50 ERA) and the Miami Marlins in game two of the three game series.

Doc is the only Phillies' starter with a win in his start. On Opening Day, Roy Halladay dominated over the Pirates through eight shutout innings in the Phils' first and only win, a 1-0 game. Despite the Phillies only scoring one run for Doc, he still managed to control the Pittsburgh hitters to earn his first win of the 2012 season. Tonight, Roy Halladay will make his second srtart of the season as he takes on the Marlins for the first time this season. Doc may be the only hope this team has right now to keep them in the game. Doc has yet to fail to impress in his tenure in Philly and 2012 seems to be looking bright for Doc. In his career, Doc has a 4-3 record with a 2.59 ERA against the Marlins.

Josh Johnson also started Opening Day for his Marlins as they hosted the reigning World Series Champion St. Louis Cardinals in their new ballpark. Johnson was thrawrted by the Cardinal lineup, allowing 3 earned runs on 10 hits through 6 innings. Johnson received the loss and started the season off on the wrong foot. Johnson has pitched against the Phillies his whole career and in 77 total innings, he has a 5-3 record with a 3.16 ERA.

The Phillies are 1-3 this season compared to the Marlins' 2-4. There's definitely a problem with the lack of offense and tonight won't be an easy task. Hopefully Charlie Manuel sends out a good enough lineup who is able to defeat JJ and the Marlins.

In other news, Marlins' manager Ozzie Guillen won't be in attendance today as he will be serving his first of a five game in a suspension regarding his "pro-Fidel Castro" comments last week. Stay classy, Ozzie.

You can watch tonight's game on TV on TCN and ESPN2.