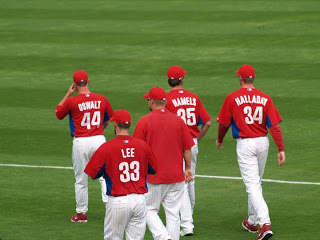 If you believe what you read, the Phillies haven't had and real negotiations with Cole Hamels and his agent about a long term deal. No progress has been made. Come November, he will be a free agent. He'll get at least a six year offer, and probably at least $130 million on the market, and that's being really cautious. He may approach Sabathia numbers. His suitors will include the Red Sox, Yankees, Cubs, Dodgers, and probably other major markets.

For the life of me, I cannot understand how the Phillies have not got this deal done yet. Hamels likes it in Philadelphia, and has said so. He's the only one of the "big three" under 30 (he's 28), he's  home-grown, he's won a World Series here, winning the MVP of the World Series and the NLCS along the way, and winning 7 post-season games, while making a couple of All-Star games, and finishing fifth in last year's Cy Young. With Halladay and Lee in their mid-30's, any hope at all of being a continued contender begins and ends with signing Cole to a long-term deal to anchor our rotation. Six years and $130-140 million isn't just reasonable, it's smart money to spend. Unless you want the pitching on this team to go the way of the hitting, you better be ready to spend on this.

Cole has said all the right things, but believe your instincts, IF he reaches free agency and Magic Johnson, the Steinbrenners, or Theo call and offer him a boatload of money, and they will, he will listen. Frankly, if the Phillies don't make him a serious offer soon, I can't say I'd blame him. It kind of is like the Jayson Werth situation, can you turn down a ridiculous offer? It's not crazy to think he'll get $160 million offered to him as a free agent. If that happens, I just don't see this team contending in the near future. Ruben Amaro and the owners need to open up the checkbook and go big, and do so now. You just don't find lefties like this every day.