Halladay Set To Take Hill Against Cubs In Series Opener 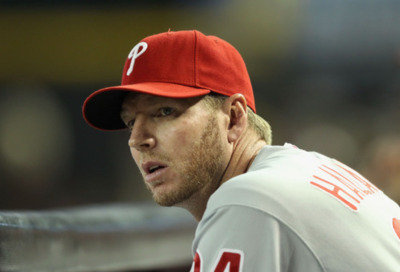 The Phils are coming back from a West Coast road trip in which they finished 5-5. They won just one series match up, against the D-backs, in four tries. The Phils managed just 15 runs through the first seven games of the road trip, but in the last two they seemed to break out. In their second series win of the year (2-for-6), the Phillies scored 20 runs total against the D-backs. Their large amount of runs helped them take two games of three in Arizona. If the Phillies have found their groove, this is the perfect time to find it.

The 9-10 Phillies are starting a four-game weekend homestand against the 6-12 Chicago Cubs tonight and who other than Roy Halladay to get the ball in the opening game. Halladay is 3-1 with a 1.50 ERA in four starts this season. He was handed his first loss last Saturday against the Padres as he tossed seven innings allowing just 2 earned runs on 5 hits. The Phillies' bats were unable to show up in time to get Doc off the hook. It was Doc's first loss of the season.

Tonight, Halladay will be looking for some help from his bats as he takes on the Cubs for the first time since July of last year. Halladay took the loss after allowing 3 earned runs on 7 hits through four innings before being taken out of the game due to heat related problems. In his career, Halladay holds a 1-4 record and a 3.72 ERA against the Cubs.

The Cubs will send out the struggling Paul Maholm (1-2, 8.36 ERA) tonight to face the Phillies' lineup. Maholm got off to a bad start this season, dropping his first two starts after allowing 6 earned runs in each of them. But he is coming off of his first win as a Cub and first of the year. On Saturday, Maholm held the Reds to one run on four hits over six innings. In his career, Malhom is 3-2 with a 4.50 ERA in seven starts vs. the Phillies.

Charlie Manuel's team may be hitting a hot streak as they're coming off of a 20-run three-game series in Arizona. With big time contributions from Hunter Pence and home runs from Laynce Nix and Ty Wigginton, the Phillies are starting to see the ball. Hopefully his lineup tonight can take hold of Paul Maholm's problems.