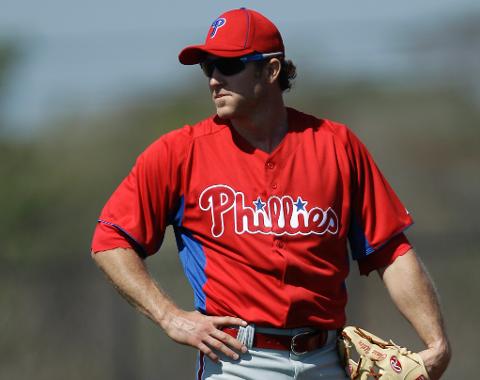 Courtesy MLB.com. (Also, I miss you.)

You've seen the updates over the past couple days. Ryan Howard is about a week away from resuming baseball activities and you could estimate that he'll be back sometime in June. Chase Utley has also been quoted as feeling better right now than at any point last year, as far as his knee pain is concerned.

It's most likely that Utley returns to the lineup before Howard. I agree with most that it would be ideal to play him at first base a couple times a week to ease him back into playing shape. However, what do we do once everyone is back, healthy, and ready to contribute (assuming there are no injuries before then. Not likely)?

Why not put Chase Utley in left field? Hear me out.

Ryan Howard has returned and will be playing every day at first base. That's his spot and will be for the rest of his Phillies career. We've seen what Freddy Galvis is capable of with his glove. Sure, he needs to improve at the plate, but we're strictly talking defense here. One could argue that his glove, along with the overall performance of our starting pitchers, is one of the lone bright spots for this team right now. Let's keep Freddy here and see what he can do with a full Major League season.

That leaves Chase Utley without a position and we currently have a hole in left field. Juan Pierre has overall been a disappointment and John Mayberry has went from "Yayberry" to "Booberry" (Just ask the people of Twitter) quicker than any of us would have liked. Why not try Chase Utley?

Chronic knees issues will follow Chase around for the rest of his career. He has two years remaining on his current contract so why not get the most we can out of those two years? Left field will come with a learning curve for him, however, it is unarguably the easiest of the three outfield positions to play. The everyday wear and tear of a leftfielder is far less than that of a second basemen. With playing second base you risk a base runner sliding into you, pivoting on double play balls and diving for ground balls in the hole or up the middle. We don't need Chase doing any of that if we can avoid it.

This idea hasn't been mentioned by anyone in the Phillies organization, but it's worth thinking about in my opinion. I like this lineup:

What do you think?