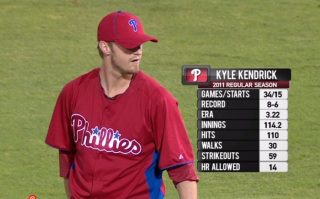 Even without All-Stars Chase Utley and Ryan Howard available, the Phillies are still a formidable team, and a playoff contender. Their starting rotation may very well be the best in the National League. Their bullpen is more than serviceable, their defense is above average, and Messrs. Shane Victorino and Hunter Pence are two excellent offensive weapons.

What's missing from previous seasons is a large margin for error. The team was once strong enough to overcome Manager Charlie Manuel's "eccentricities" (See also, lack of strategic ability.), just as Ron Washington's Texas Rangers are currently able to frequently overcome their manager's shortcomings. The 2012 Philadelphia Phillies need a manager who is a force for good, or at least a force for neutrality. So far, Manuel's inability to adhere to the basic tenets of baseball management have proven quite damaging to the Phillies' winning percentage. It is, obviously, very early in the season, but if Manuel continues to repeat his mistakes of the season's first three games, the Phillies may be hard-pressed to make the playoffs.

Charlie Manuel has an inherent advantage in this area, namely the Phillies' outstanding starting rotation. Most of the work Manuel has to do in this area is to effectively manage his bullpen. Unfortunately, he has not done so, and the poor performance of the offense has made his relief mistakes all the more glaring.

Put your players in a position to succeed.

It is still very early in the season, and maybe Charlie Manuel will learn from his strategic errors. Much more likely than Manuel actually learning from his mistakes is the possibility that the Phillies' team will be strong enough to overcome them. But, in 2012, Manuel's managing could be the difference between a comfortable postseason berth, a spot in the crapshoot of a one-game Wild Card playoff game, or a season without baseball playoff action in Philadelphia.