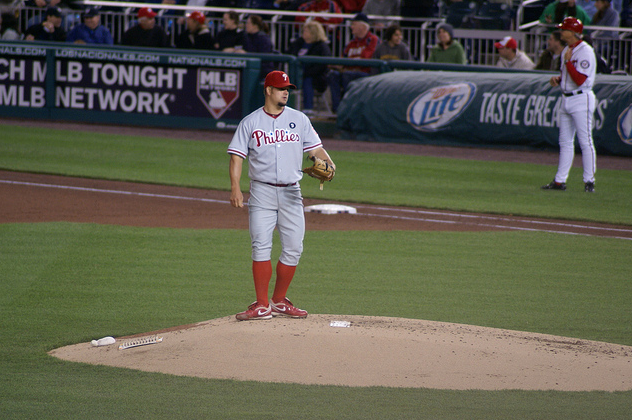 It had been 13 games since the Phillies had lost a game at Petco Park. But as we know, all streaks come to an end sometime. The Padres routed the Phils 5-1 last night, winning their first game at home against the Phillies for the first time since 2008. Roy Halladay wasn't as sharp as he had previously been in his last three starts. Doc allowed a very uncharacteristic four walks through 7 innings. Although Halladay allowed two runs, he was given no run support whatsoever and was given the loss.

With the Phils up 2-1 in the series, they will turn to Joe Blanton (1-2, 4.26 ERA) to avoid the series split. In Blanton's last start, he was rocked around by the Giants, who worked up four earned runs on 11 hits through five innings. Compared to his season debut, a seven-inning one run effort, it was not so good. Blanton will be making his third start of the season and his fourth career start against the Padres. In three starts (29 innings pitched), Blanton is 2-1 with a 4.66 ERA.

The Padres will put their hopes of a series split upon righty Anthony Bass (0-2, 3.97 ERA), who is seeking his first win of the season. Bass, in his last start, gave up three runs on four hits while walking and striking out seven Rockies over five innings. Bass was handed the loss despite throwing a decent outing. Bass has pitched just 2/3 of an inning against the Phillies in his career.

The Phils' offense was bleak last night behind their ace Roy Halladay. With Halladay throwing four consecutive strong efforts, it's only right that the offense should be able to score atleast enough runs to take the lead. Last night was the 9th game of the season that the Phillies scores 2 runs or less. 9 games out of 15.

You can watch the game on TV on myPHL 17.