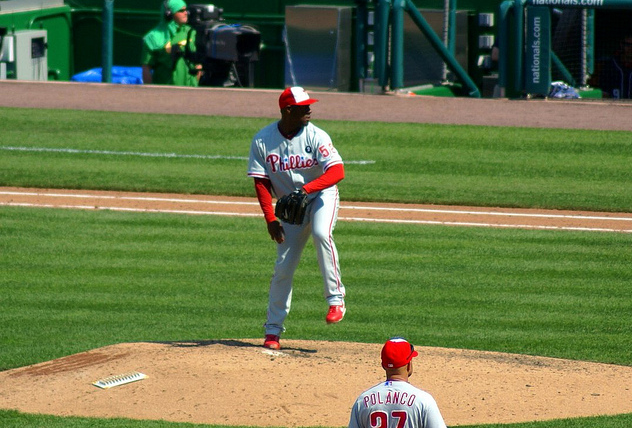 The Phillies have activated Jose Contreras this afternoon and have sent Joe Savery down to Triple-A Lehigh. This news, coming right after the Phillies' 8-2 win over the Mets, is the first transaction news in awhile.

Jose Contreras, who had elbow surgery late last season, had started the 2012 season on the DL after posting a 0-0 record and a 19.29 ERA in three Spring Training appearances. Contreras was assigned to Single-A Advanced Clearwater for a five-game rehab stint. Contreras posted a 0-1 record with a 8.31 ERA in five games. Contreras started a game, but all in all pitched 4 1/3 innings.

No immediate timetable has been announced but Contreras will travel with the team to San Francisco on Monday.

"I feel good," Contreras said. "My last five outings were good. My velocity was better, my location was better. I'm very happy to be back, personally, because my health is good and my arm is good and I can help the team."

That's good news to hear from the "Big Truck", who is going to be in the bullpen to help the team as much as he can.

Lefty Joe Savery (0-0, 3.86 ERA) has been optioned to Triple-A Lehigh. Savery pitched in two games this season, allowing one earned run on 2 1/3 innings of work. On Friday, Savery pitched 2/3 of an inning, allowing a walk.