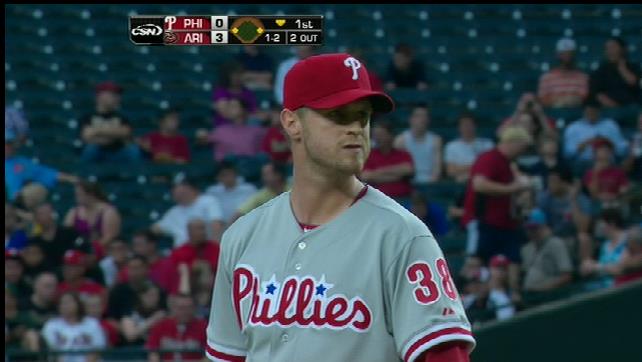 Last night the Phillies rebounded from a bad loss on Friday night. Joe Blanton earned his second win of the year after the offense, led by Jimmy Rollins and Carlos Ruiz, scored five runs to give the Phils their 10th win of the year. Jimmy Rollins batted leadoff for the first time this year and it paid off. Rollins went 1-4 with a 2 RBI double in the fourth inning. Maybe this is a sign that Jimmy Rollins should be batting leadoff from now on. This afternoon, the Phillies will look to keep the winning spirit alive as they look to take the 2-1 upperhand in the series.

Kyle Kendrick (0-1, 9.39 ERA) will make his second start in place of the DL-ridden Cliff Lee. In Kendrick's last start, he crapped the bed. He allowed seven earned runs on 11 hits over three innings against the D-backs Monday night. It was the worst start of any Phillie pitcher this year and it's not the best performance coming from a guy with a newly-extended contract. Kendrick will hope to rebound against the Cubs today, a team he has four innings of work against to his credit. He has a 0-0 record and a spotless ERA against the Cubs all-time.

The Cubs will task righty Matt Garza (1-1, 3.38 ERA) this afternoon in an effort to take today's game. Garza was solid in his last outing, allowing 2 runs over seven innings but not getting the decision. Garza has not been so solid on the road this season. Garza has allowed more runs in one start away than three games at home. In three career starts, Garza is 1-1 with a 1.29 ERA against the Phillies.