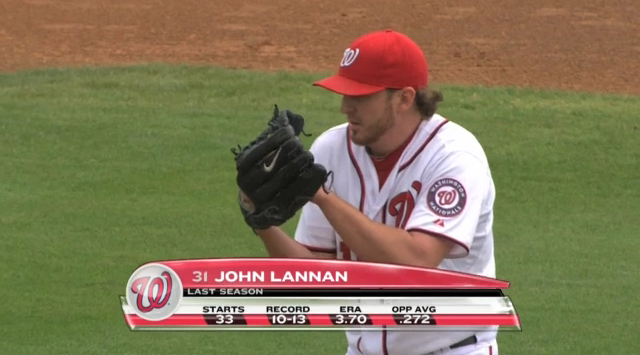 When the Nationals acquired both Gio Gonzalez and Edwin Jackson this winter, anyone that could count realized that the Nationals had six starting pitchers for five slots.

The second-longest tenured Nationals player was John Lannan, famous in Phillies history for breaking Chase Utley's hand in 2007.  Lannan and his $5 million salary was sent to AAA yesterday.

This leaves the Nationals starting rotation as follows:

Here is a question for you:  Would you sign pitcher A to an $11 million, one-year contract, so that player B and his $5 million contract can NOT pitch?

Player A is $11 million Edwin Jackson, player B is John Lannan.  The two pitchers (aside from wins and losses, which can probably be tossed out since Lannan pitched for an impotent Nationals lineup) are very similar in statistics.

Amanda Comak of the Washington Times point out that the Nationals are essentially spending $16 million for Edwin Jackson to pitch:

Lannan's demotion means the signing of Edwin Jackson — which essentially forced Lannan out to begin with — cost them not just the $11 million owed to Jackson this season but also the additional $5 million Lannan will make. They're still spending $16 million but they're only getting one major league starter out of it.

Considering the fact that Brad Lidge opens the season as the Nationals' closer, maybe one of these starters could have helped them out in the bullpen.

I'm sure Lannan will come up at some point.  Stephen Strasburg is supposedly on an innings limit this season.   It is good to know that the Nationals will just stop pitching him in September if the Nationals are breathing down the Phillies' neck for the NL East title.