Not Enough Runs For the Phillies Against the Giants? Plenty In AA (19) at “The Diamond” 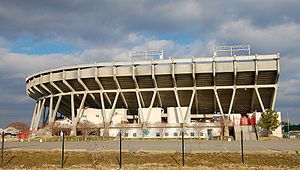 The Phillies lost to the Giants 4-2 last night. The offense wasn't so good. All the way across the country, 3,000 miles from San Francisco, the Reading Phillies were playing the Giants affiliate in the Eastern League, the Richmond Flying Squirrels. Playing at the famed ballpark in Richmond, "The Diamond," Reading scored more runs than the Phillies may all week, putting up a 19-6 beat down on Richmond.

Trevor May started and struck out seven in his five innings of one run ball, but he was not the story on the mound. He did got 2-for-3 at the plate though, which tells you just what kind of night the R-Phils had. Cesar Hernandez had a ridiculous five single night, and scored five runs. Leandro Castro had three hits, including a double, and a ridiculous six RBI's. Darin Ruf went 5-for-5, and hit the only homer for the Pigs, driving in two and scoring four. Catching prospect Sebastian Valle went 3-for-5 with a double, three RBI's, and two runs scored. Tyson Gillies had two hits and two runs, Jiwan James a double and two runs, and Tim Kennelly had two RBI's and a run. They weren't joking when they said "everybody hits" last night. Only Troy Hanzawa wasn't a help last night, which dropped his season average to .289.

As luck would have it, the first place Reading Phillies are already playing this morning, and trail 2-0 in the fourth. Too bad you can't carry some runs over, right?