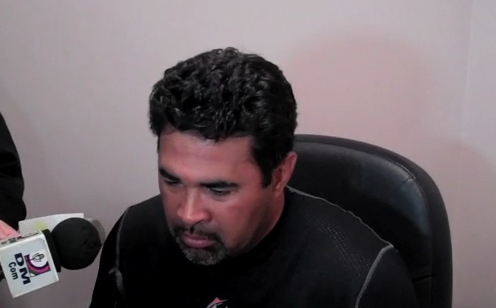 Marlins Manager Ozzie Guillen was suspended by the Marlins for five games for comments made about Cuban dictator Fidel Castro.

Here is what Guillen said about Castro over time:

"He’s a bull—- dictator and everybody’s against him, and he still survives, has power.  Still has a country behind him. Everywhere he goes they roll put the red carpet. I don’t admire his philosophy. I admire him."

Good idea, Ozzie.   Miami's "Little Havana" section is basically filled with people who had to float on rafts across the sea to escape the dictator.  Many left family behind and many did not make the journey, but were willing to do so in order to create a better life.

Then, Ozzie offered a stupid apology:

"I will apologize if I hurt somebody’s feelings, or I hurt somebody’s thought.  I want them to know I’m against everything 100 percent — I repeat it again — the way this man (has been) treating people for the last 60 years."

The news reporter for CBS Miami cares so much for Ozzie's comments he did not even correct his poor English for the story.

Comissioner Joe Martinez of Miami-Dade County called for Ozzie to resign or be fired:

"In light of his comments regarding Fidel Castro, I ask for the resignation of the Miami Marlins manager Ozzie Guillen. I ask for the support of all those who have suffered cruelty and violation of human rights anywhere in the world. Mr Guillen should be ashamed of feeling respect for Fidel Castro or any dictator that oppresses the citizens of a country".

Well, now he's suspended five games, and had to leave his team behind in Philadelphia to go address the media.

I suppose he'll be sad and he will drink.

☑ Build an ugly stadium.
☑ Trade for $17 million starter who gets into fistfights with teammates and can't pitch anymore
☑ Sign free-agent All-Star shortstop to offend current All-Star shortstop
☑ Sign a controversial manager who never shuts up
☑ Piss off/alienate entire existing fan base (the 3000 they had) with pro-Castro comments