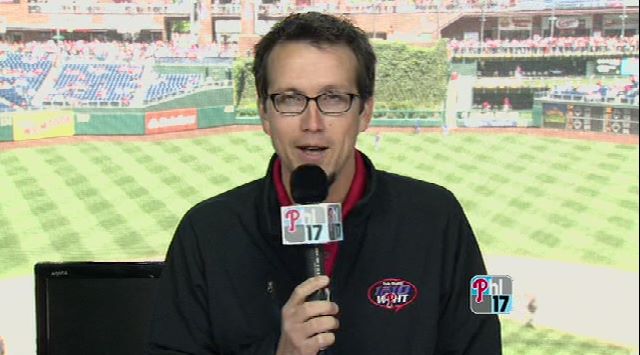 Long have I wished that the Phillies would be broadcast on FM.  If you are like me and live near either train tracks or trolley wires, the signal is almost unbearable to take.  The issue with switching frequencies was that the powerful, long revered 1210 AM frequency was too good to leave.

CBS Radio responded to the demand by announcing that they would carry all Phillies games on 94 WIP-FM in addition to 1210 AM.

There were some cost benefits for CBS Radio.  Instead of hiring a host to fill a shift on 610 WIP while many of their listeners were listening to the Phillies game.   As such, with some Phillies games appearing on 1210AM, 610AM, and 94FM all at once, there were cuts to staff.  One of those cuts was Eytan Shander.

Shander used his Facebook page to make this announcement on March 21:

Officially out at WIP. Want to thank those who supported me there, and truly thank anyone who took the time to listen to me. Met some great people, some who really went above and beyond during a really tough time. I leave with no animosity towards cbsradio. I'm still with sirius and hope to continue to be a part of Philly radio in the future.

March 23 he appeared on 97.5 the Fanatic as a host for the first time.  That did not take long.  Steve Trevelise is now on New Jersey 101.5 full-time.   Another apparent casualty: Seth Everett is no longer the host of "Extra Innings" or "Inside Pitch" after and prior to Phillies games.  Of course, the Phillies broadcasts mean fewer shifts for popular part-timers Brian Startare, Reuben Frank, Paul Jolovitz, and Jody McDonald.

But, CBS Philly was able to fill the airtime with "4 for 4" ads boasting that they had all four teams all on one station.  That did not last the month of April.

Late last week the Sixers defected for 97.5 the Fanatic.  Now it appears that the Flyers will follow suit, and who can blame them?

Since the Phillies season began, the Sixers were heard on 94.1 FM, 98.1 FM, and 610 AM. On Sunday as Flyers fans eagerly awaited the 3pm round 2 playoff start, the Phillies were engaged in a snoozer against the mediocre Chicago Cubs.   The Phillies had priority on the FM dial.

CBS Radio may have benefited better if they had chosen the 98.1 FM frequency for the Phillies.  Most of CBS media is now united; it would not have been hard for Phillies fans to find the frequency.  (Side note: remember when the Phillies were on "Oldies 1210", a simulcast of WOGL?")  Maybe KYW 1060 is going to move as well.

This leaves me with a few questions: