Phillies and Braves End Spring Training in a 7-7 Tie 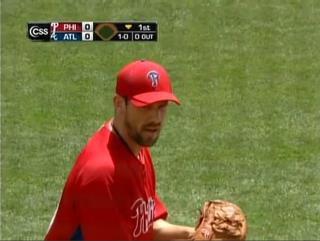 Happy last day of spring training! And what a great last day it was for starter Cliff Lee and the Phillies' offense. In the beginning/middle of the game, anyway. On this Sunday afternoon, the last game of spring training for this Philadelphia team was played against the Atlanta Braves at the Wide World of Sports in Disney.

The first run of the game came in the third inning with Lee on the mound. Julio Teheran scored on a single from Brian McCann.

And in the next inning…well, the game finally got interesting. First, Placido Polanco scored on a force out from Hunter Pence with the bases loaded. Then, Jimmy Rollins scored on a double from Shane Victorino. Next, Carlos Ruiz reached on a fielder's choice scoring Hunter Pence and putting himself and Victorino in scoring position.

It was at that point in the inning when Julio Teheran was taken out and replaced by former Phillies prospect Yohan Flande, who has a solid chance at making the big league bullpen. This didn't help his case: Freddy Galvis singled to score Victorino, followed by an RBI single from Cliff Lee. Juan Pierre was out on a sacrifice bunt, but Freddy Galvis made it home in time to score the sixth run of the inning.

In the top of the fifth inning, the Phils kept it going. Carlos Ruiz scored Hunter Pence on an RBI single, making it a 7-1 game in Lake Buena Vista.

It was safe to make a few defensive changes after the surge of offense in the fourth and fifth innings. Joe Savery hopped on the mound in place of Cliff Lee. Here's Lee's line from today: 4 IP, 5 H, 1 ER, 1 BB, 1 K.

Savery survived a bases loaded situtation in the fifth inning, but wouldn't be so lucky in the sixth. After Matt Diaz doubled to right field, J.C. Boscan doubled to score Diaz. Only one run would score in the inning as Savery looked to impress the managerial staff of the Phils. He could possibly make the 25-man roster with the absence of Contreras and Stutes.

Brian Sanches pitched the eighth inning and gave up one run to this Braves team, Jordan Parraz had grounded out to score Jose Yepez from third. Frank Gailey, a Philadelphia native acquired in the offseason from Toronto came in for the ninth, and hell nearly broke loose. Josh Wilson hit a two-run homer to make it a 7-5 game. With the bases loaded afterwards, Tyler Pastornickey scored on a double play ball. Eric Hinske then doubled to score Luis Durango. Tied game. Ryan Duke then took over for Frank Gailey.

In a 7-7 tie, the bases were loaded for J.C. Boscan who ended the game on a pop-up to Laynce Nix. That's how the game would end. Spring training is officially over!

From here, the Phils will hop on a plane and head home to south Philly tonight. Tomorrow, they'll begin a two-game on-deck series with the Pittsburgh Pirates before heading to Pittsburgh for Opening Day on Thursday. Meaningful baseball is finally back!