Phillies Break Out the Lumber to Even the Series with Dbacks 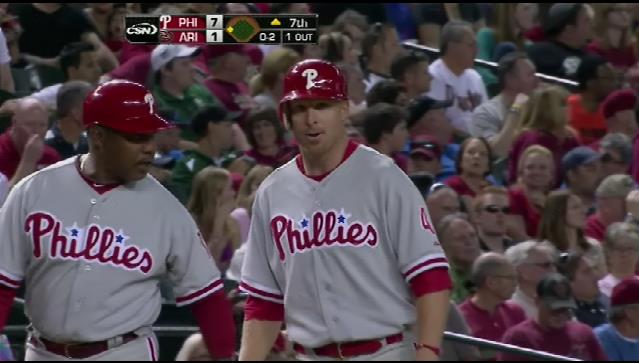 After scoring five runs in the 9th in last night's game.. We all must have thought: Maybe we should of had saved runs for the next game right? Well not really…. this game was all about the offense!

Worley allowed just one run over six innings as he scattered five hits and a walk while fanning six.

The Phillies scored four in the fourth inning to take control early in the game. Hunter Pence homered with one out just over the right-field fence, Ty Wiggington doubled and Nix followed with a long home run to right to give the Phillies 4-0 lead.

Former Phillie, Cody Ransom led off the fifth with a solo home run to left, his first of the season, to pull Arizona within 4-1.

Weird. Bad call. Whatever you wanna called it. Juan Pierre hit a flyball… we all thought it was caught. However, second-base umpire Angel Hernandez, ruled it a trap and the bases were loaded. The blown call lead to Pete Orr ripping a three run triple to right, as the Phillies padded their lead to 7-1 in the seventh.

Shane Victorino added a solo shot in the eight inning to give the Phillies 8-4 lead.

Jose Contreras gave up three earned runs, all by doubles. Bastardo retired the only batter faced.

Chad Qualls gave up his first earned of the year to Jason Kubel's solo shot, then he retired the next three batters by striking them out.

Jonathan Papelbon saves the ballgame as he picks up his 6th straight save. Vance Worley gets his second win of the year.

… and the Phillies are no longer in last place of the NL East.

After the game, the Phillies announced Micheal Stutes is being placed on the 15 day disabled list, while Michael Schwimer is called up.

Cole Hamels set to take on Trevor Cahill in the series finale at 3:40pm on Comcast Sportsnet.