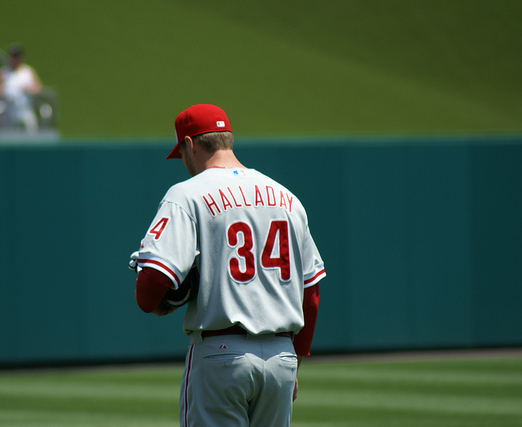 It's games like these that really make you wonder how the rest of this season will treat the Phils. Roy Halladay took the mound tonight in the third game of this four-game series against Cory Luebke and the Padres. The Phillies were looking to extend their winning streak in San Diego to 14 games, but the Padres had other plans.

Halladay appeared very lost in the bottom of the second. For the first time in his career, he walked three straight batters. With the bases loaded, Orlando Hudson grounded out to score Yonder Alonso, putting the Padres on the board.

Alonso would send home the next run in the third inning on a double to center field which scored Chase Headley. 2-0 San Diego.

Meanwhile, Cory Luebke would pitch seven innings and give up two hits to the Phillies; one to Placido Polanco in the fourth, the other to Roy Halladay in the fifth.

He allowed a double to Jason Bartlett which scored Cameron Maybin, making it a 3-0 game. Later, Orlando Hudson tripled to score Bartlett. Hudson would score on an RBI single from Jesus Guzman. It was not a cup of tea inning for Stutes who was responsible for three earned runs in the eighth. 5-0 Padres.

Huston Street came in to close it out in the ninth, but wouldn't do so without giving up a run. With Jimmy Rollins on third, Ty Wigginton hit a double down the left field line, putting the Phillies on the board, and there's your ball game.

The Phillies dipped back down below .500 and are 7-8 this season. They dropped their first game at PetCo park since 2008 tonight, which is a bit concerning with this offense. Joe Blanton will take the mound for the finale of this series tomorrow afternoon at 4:05.