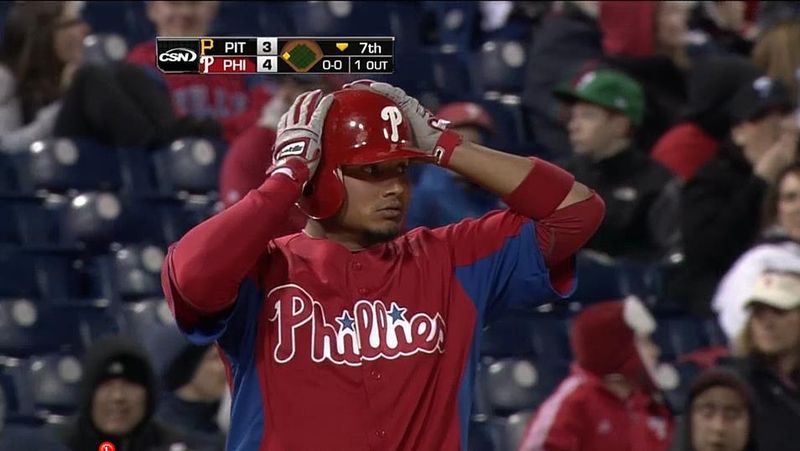 Despite this series being the finale of spring training, it's still an exciting two-game exhibition series because it's being played at home, Citizens Bank Park. The Pirates have come to town for two nights before making their way back to Pittsburgh to take on the Phillies for Opening Day. Joe Blanton took the hill tonight against Tony Watson.

Before the game began, a few lucky fans ran into a few players and coaches. Since the minor leaguers take over these games by the fourth inning, the big leaguers get to walk around the concourse and meet fans. Last year, we saw Carlos Ruiz and Ryan Madson serving famous Chickes and Petes crab fries, while Chase Utley played bartender for the night.

This year, two young fans were surprised with two of the best seats in the house, right in the bullpen! Charlie Manuel handed out tickets and signed autographs at the ticket counters while Cliff Lee drove a golf cart around CBP, picking fans up along the way. Imagine telling your grandchildren about how one of the greatest pitchers in baseball drove you around in a golfcart. Story for the ages!

Around the eighth inning, Jimmy Rollins made his way up to the fans in the seats to sing happy birthday to nine-year-old Matthew. Jimmy is Matthew's favorite Phillies player. You can imagine the smile on the birthday boy. Actually, you can see it: 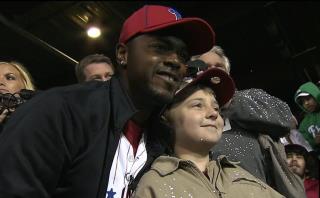 As for the ball game…

The Phils jumped out early before this became a AAA game. Jimmy Rollins, the number three hitter, popped up a sacrifice fly to score Juan Pierre in the first inning. In the following inning, Shane Victorino tripled and was later scored on a groundout from Ty Wigginton. The third inning brought about another run scored by Juan Pierre, this time on a double from Rollins. Rollins kept going to third but was tagged out to end the inning.

Blanton had a perfect game going into the third inning before the Pirates put up two runs. Neil Walker singled to score Andrew McCutchen, followed by a Garrett Jones double which scored Walker. 3-2 Phils.

Joe Blanton was done after 4 & 2/3 IP. He struck out three and allowed two runs on three hits. Not your average Joe!

In the top of the sixth inning with minor league relief pitcher Pat Misch on the mound, Andrew McCutchen took him deep to left field to tie the game up at three. Freddy Galvis chopped a triple to right-center field, scoring Ty Wigginton in the seventh inning, putting the Phils up 4-3.