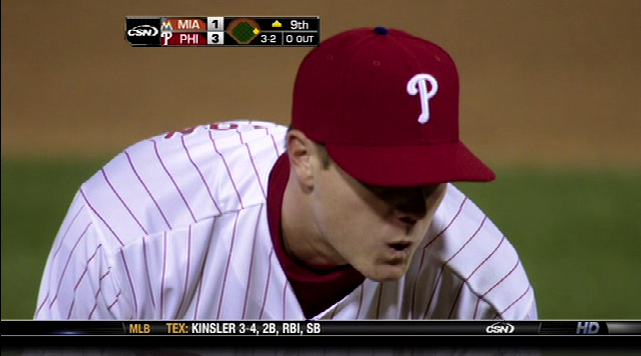 Well, when Jonathan Papelbon made his Citizens Bank Park debut, he strolled out to "Man in a Box" by Alice in Chains.  Good song.

Well, his new music may be, um, controversial?  In his first save opportunity tonight, Papelbon came out to Marilyn Manson's "Antichrist Superstar"

Check out the lyrics:

You built me up with your wishing hell
I didn't have to sell you
You threw your money in the pissing well
You do just what they tell you
REPENT, that's what I'm talking about
I she'd the skin to feed the fake
REPENT, that's what I'm talking about
Whose mistake am I anyway?
Cut the head off
Grows back hard
I am the hydra
Now you'll see your star
Prick your finger it is done
The moon has now eclipsed the sun
The angel has spread it's wings
The time has come for bitter things

The lyrics seem pretty tame, but the title is enough to probably bother someone.

As for Jimmy Rollins, he picked a song I really like, "Uptown Anthem" from Naughty By Nature.  Besides for the team missing the coolest part of the sound, which is the introduction, they picked a part of the song to play that contains the N-word and the phrase "ho-happy pappy" and a drug reference.

Good idea?  Here are the lyrics from the clip played last night:

Hey, you could smoke a spliff with a cliff
But there's still no mountain hiiiigh enough, or wide enough to touch
The naughty nappy nasty n**** the nasty trashy hoe happy pappy
That's Happi to be Nappi
Me and Vin rock when spots hit flocks
and groups and troops with Timbo boots and jail suits
That's how I'm rollin my hair-do don't

In a family friendly ballpark, there may be better choices, no?

Here they are.  Parental Advisory: don't let your kids listen to these unless they are at a Phillies game.