Phillies meet the Mets for first time in 2012 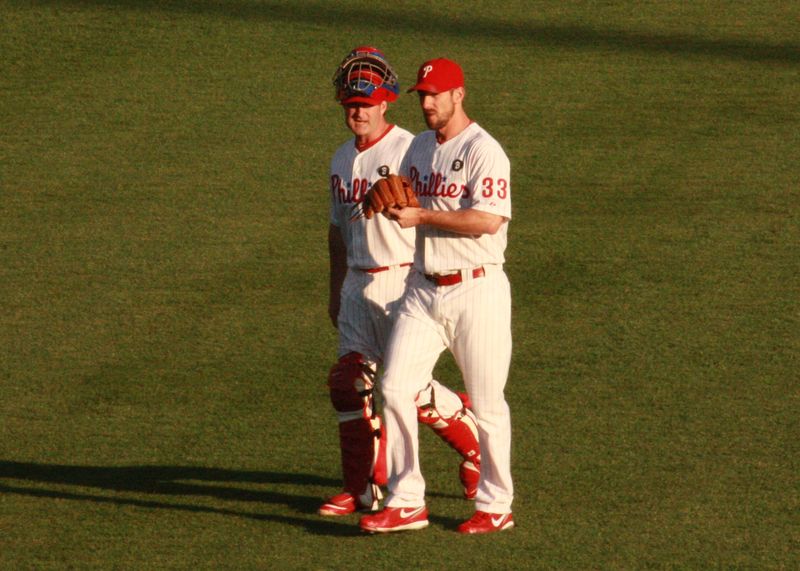 Cliff Lee gets the start in the series opener against the Mets. (Kevin Durso/Philliedelphia)

After six games, the Phillies finally have put together somewhat of a winning streak. Two games isn't much of a streak, but it's been a while since we could say the Phillies won back-to-back games.

That really doesn't mean much when it comes to winning streaks. The Phillies are still sitting at .500, but two wins in a row does help ease the tension in the air at Citizens Bank Park.

Enter the New York Mets, the only NL East team no one gave any chance to win at all this season. They simply started off at 4-0 on the season, but now have come back to earth a bit by losing their last two games.

The Mets have now fallen to second in the division, but don't think their play hasn't suffered a bit with the loss of David Wright to a broken pinky.  Wright has hit .583 in the early part of this season, but since his departure from the lineup the Mets are 0-2. He has been given some clearance to work on baseball activities, but is still a question mark as tonight's series begins.

The Mets, otherwise, has some decent talent. Ike Davis and Josh Thole are two budding stars. Thole has a .429 batting average and two doubles while Davis has struggled in the early going, batting just .050 (1-for-20).

Should Wright miss one or more of the games this weekend, then the toughest bat in the lineup is Daniel Murphy. Murphy has hit .320 to start the season and is second only to Wright in run-production, driving in three runs. Also watch for Ruben Tejeda, who hasn't had the greatest success in his you career, but leads the Mets with four extra-base hits.

Now to the guys on the mound. Here are the pitching matchups for the series.

Dickey pitched a solid debut himself, allowing two runs on five hits in six innings to the Atlanta Braves in a 4-2 Mets' win. The knuckleballer makes his second start of the season against a team he held to just one hit once already in his career. In his career against the Phillies (six starts), Dickey is 2-3 with a 2.61 ERA.

In the middle game, Vance Worley (0-0, 1.50 ERA) takes on Jon Niese (1-0, 4.50 ERA) – Worley's last start was a very successful one. He debuted in his second season with another great day on the mound, allowing just one run in six innings against the Pirates. Unfortunately, another bullpen meltdown would give Worley a no-decision. In his career against the Mets (six games, four starts), Worley is 3-1 with a 3.00 ERA.

Niese is coming off a winning debut as well. He carried a no-hitter into the seventh inning against the Braves before losing the bid, but still led the Mets to victory. His success against the Phillies hasn't been as good. He posted a plus-10 ERA in Citizens Bank Park last season. In his career against the Phillies (eight starts), Niese is 3-4 with a 4.07 ERA.

In the finale, Cole Hamels (0-1, 5.06 ERA) takes the mound against Mike Pelfrey (0-0, 4.76 ERA). – Hamels debuted on a sour note, allowing four runs (three earned) in a 6-2 loss to the Marlins. However, Hamels is not known for starting strong. If his second start last season, a three-hit shutout of the Braves, is any indication, Hamels tends to rebound in his second outing. In his career against the Mets (17 starts), Hamels is 3-10 with a 4.46 ERA.

Pelfrey took a no-decision in his last start allowing . Pelfrey is a hit-or-miss type of pitcher. He has a decent record against the Phillies, but allowed 25 runs to an anemic offense last season and posted a 9.49 ERA in Citizens Bank Park, all factors working against him. In his career against the Phillies (17 starts), Pelfrey is 7-7 with a 5.37 ERA.

The pitching matchups are very tough to tell. The Phillies can beat every one of the Mets' starters this series. Will they? That's a whole different question.

Vance Worley and Jon Niese are both young pitchers. Worley has more success against the opponent, so advantage Phillies.

Cole Hamels isn't great against the Mets. Mike Pelfrey may or may not be good on Sunday, depending on who shows up. Again, it's a toss up. I give the Phillies two of three games in this series. For one, they should win more games than the Mets do anyway, based strictly on talent level, but also if the Mets lose anymore help, like Wright, then things may really look good for the Phillies.

The other pitching matchups, new lineups or old, still favors the Phillies. So in that case, if you see the word toss up above, it may not be a bad idea to pick the Phillies.

The Phillies are on the road for their next three series on a west coast trip. They make stops in San Francisco, San Diego and Arizona.