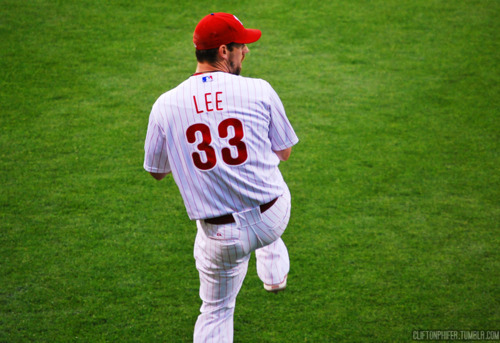 So the Phillies lost their last home game of Spring yesterday. Not the best note to leave Clearwater with, but there is still one last game to be played. The Phillies will head up to Lake Buena Vista to play the Braves at Champion Stadium. It's been a very long and torturous Spring for the Fightin's, but a full season is right ahead. The Phillies are 12-16-3 this Spring and it would be nice to leave the state of Florida on a winning note.

Cliff Lee (1-2, 2.49 ERA) will get the nod this afternoon as he makes his sixth and final Grapefruit League start. In Lee's last start, on Friday against the Pirates, he tossed six shutout innings, allowing just three hits. Lee struck out three and walked one, but received the no decision.

The Braves will send out youngster Julio Terehan (0-1, 9.00 ERA), who will be making his third start of the Spring. Terehan is making a push for the Braves' starting rotation (shouldn't be hard), but his high amount of earned runs allowed may play a factor in the decision. Terehan has allowed 13 earned runs in 13 innings pitched.

Terehan will take on a Phillies lineup that is probably the very same lineup that Charlie Manuel will write up Thursday. Jim Thome is playing first base, Juan Pierre is leading off (questionable), Freddy Galvis is playing second, and Carlos Ruiz (21-41 .512 avg, 2 HR, 9 RBI) is in the catcher's spot.

Today's game is not on TV. You can listen on the radio, though.