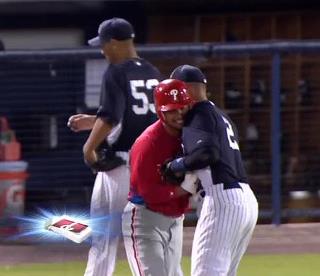 Well, we're at the end of the Florida portion of the exhibition season, and tomorrow there will be a game at Citizen's Bank Park. The season is here.

The Phillies ended the spring with a 7-7 tie. You can check the box score here. Joe Savery didn't help himself today, but he still can make it. Podsednik, Orr, and Luna all went hitless, and finish the Grapefruit schedule with a .315, .286, and .320 average, respectively. Juan Pierre finished strong at .368.

You can't tell much from that stuff, but I think the roster is close to set. Here's what I see right now.