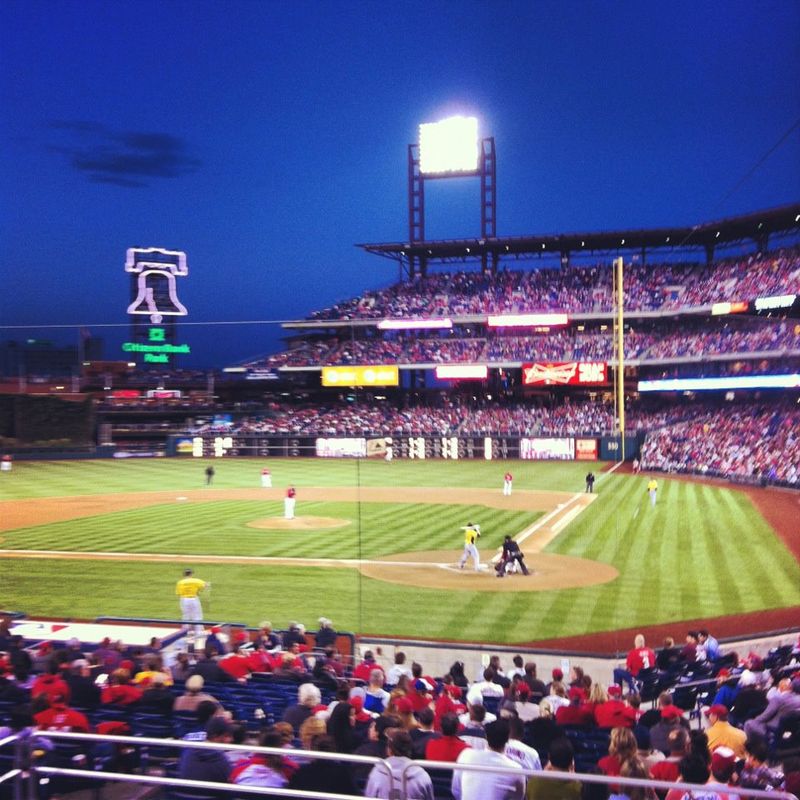 Ah, finally, the last game of spring training. It certainly didn't feel like spring at Citizens Bank Park on this chilly evening. But, the buzz of baseball in the air is sure to warm your heart. Much the same of last night's game in this on-deck exhibition series, the fans were able to interact with the players.

Carlos Ruiz, just like his buddy Cliff Lee, was in charge of chauffeuring fans around the outside of the ballpark in a golf cart-like vehicle. Placido Polanco, Roy Halladay, and Carlos Ruiz held a Q&A with the fans prior to the start of the game. These are just a few reasons why on-deck games are worth going to.

With Cole Hamels on the mound tonight against James McDonald, the offense backed Cole up early on. Shane Victorino scored the first run of the night thanks to an RBI double from Hunter Pence in the first inning.

Cole pitched a fantastic four innings, allowing just three hits, walking none, and striking out five. Antonio Bastardo replaced him in the fifth, but only pitched 2/3 of an inning. While he was still pitching, Robbie Grossman doubled to score Clint Barmes. He was responsible for the run that scored after he left when Yamaico Navarro singled to score Grossman with David Herndon on the hill.

In the bottom of the fifth, Pete Orr scored from second on an RBI single from Shane Victorino. With Brian Schneider at second and Shane at first, Placido Polanco proceeded to crush a baseball and send it to the stands. 5-2 Phils.

In the bottom of the eighth, Laynce Nix doubled and was later scored from third on a double from Pete Orr. Brian Schneider drilled a single to right field to score Orr, making it a 7-2 game.

That would be the only action in tonight's game, sadly. The Phils will have to save some runs for the upcoming series at Pittsburgh.

With this exhibition series officially over, the 2012 regular season has begun. On Thursday, Roy Halladay will take the mound in Pittsburgh followed by Cliff Lee on Saturday night, and Vance Worley on Sunday afternoon.