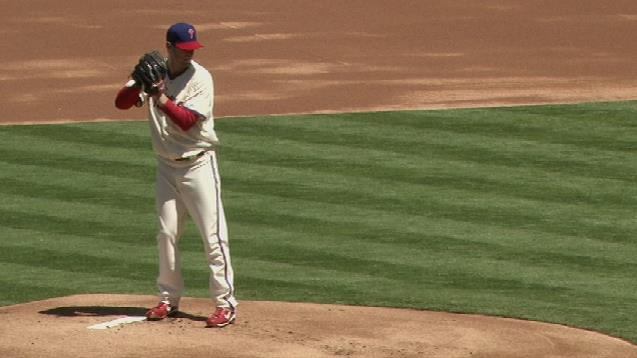 Kyle Kendrick piched very well this afternoon against the Chicago Cubs, coming back from a horrid three-inning outing in Arizona last Monday in which he allowed seven earned runs on 11 hits, walking one and striking out one.

This afternoon he allowed three runs (two earned) on five hits, striking out seven and walking one in six innings.

Ian Stewart provided the first run with an RBI groundout in the second. In the following inning, Campana scored on a sac fly from Castro. In the fourth, Joe Mather hit a solo homer to left field, giving the Cubs a 3-0 lead.

Matt Garza, this afternoon's starter for the Cubs was completely dominating this Phillies lineup. He faced the minimum through 6 1/3 innings. He allowed two singles in the first inning to Rollins and Pierre, but Rollins was out on a fielder's choice from Pierre, and Pierre was caught stealing second.

Jose Contreras pitched a 1-2-3 seventh inning, striking out two in relief of Kendrick.

Juan Pierre walked in the seventh inning with one out, ending Garza's streak of batters retired. He was having himself a very Cole Hamels-esque afternoon, if you remember Hamels' last start in Arizona in which he retired 18 straight batters faced. Garza struck out 10 in seven innings allowing one hit and walking one this afternoon.

David Herndon came in for the eighth inning and allowed a run to score on a fielder's choice from Starlin Castro. 4-0 Chicago. Later in the inning, Bryan LaHair scored on an RBI single from Baker. Herndon pitched a 1-2-3 ninth inning to follow.

Rafael Dolis came into the game in relief of Garza, sending the Phils down 1-2-3. Ugly, ugly game for the boys in red pinstripes.

CarlosMarmol came in for the ninth and walked Pete Orr and Jimmy Rollins to kick off the inning. After Pierre lined out, Pence hit an infield single, loading the bases. It was the second hit of the entire game for the Phils. Ty Wigginton walked, sending home Pete Orr. 5-1. Shane Victorino grounded out to end the ball game.

Vance Worley gets the start tomorrow night in the finale of this series. Hopefully the Phillies will be able to tie the series, rather than lose it three games to one.

This has the same feeling as the collapse of the Eagles last season albeit with less drama.