Phillies Win The Duel In The West 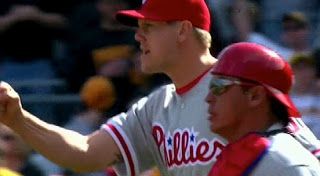 It's the "Rumble In The Jungle," the "Thrilla' In Manilla," or just another classic Cy Young vs. Cy Young battle. For the first time since the 2010 NLCS, Roy Halladay and Tim Lincecum matched up. If you remember in that series, the two multi-time Cy Youngs split games one (Lincecum) and five (Halladay). Tonight was not nearly as well pitched as that was though.

Doc was his normal self. After a first inning run, he settled in, battling through eight strong, on 109 pitches. He struck out six, walked an uncharacteristic three, gave up seven hits, and surrendered two runs, both earned, but was never in serious danger of losing his lead. Papelbon came on in the ninth to get the save, giving up a two-out hit, and nothing else along the way, for his third save.

The offense never put Doc in jeopardy coming out the gates with a four run first against Lincecum. With one out, Placideo Polanco doubled, then Jimmy Rollins walked. Hunter Pence plated Polanco on a single to center, and then Shane plated Jimmy with a single to center of his own. Laynce Nix plated Hunter and Shane with a double to right. Lincecum stranded him at third though, ending that threat. Not much else would happen until there were two outs in the fourth, and Freddy Galvis doubled to right, bringing up Halladay in what seemed like a harmless spot. Halladay singled to right, plating Galvis with two outs, and giving the Phillies a then 5-1 lead. Halladay gave up a run in the bottom half of that inning, and no one else scored again. For seven of the nine innings tonight, we saw what we expected. Sure, the Phillies had base-runners, but Lincecum got out of jams. The Phillies cashed in just enough tonight, and were resourceful at not letting an ace off of the hook.

At ten games in, this team is 5-5. There's 152 games to go, and a lot of season left, but this win is gratifying. Last year, Lincecum was nearly unhittable against a 102 win team. Well, the Phillies got him this time.