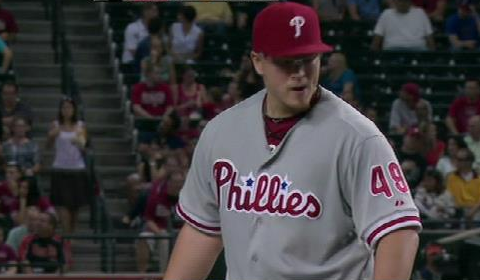 We all wanted to forget about yesterday's excruciatingly painful loss to the Cubs in which the Phillies were held to two hits. Well, this game was definitely another crazy one, only the Phillies offense would jump out in front at the start and the close.

Chris Volstad started tonight's game for the Cubs in his first appearance in Philly since signing with Chicago (recently pitched for Florida). He hasn't had much luck here, and it really showed in the first inning.

Jimmy Rollins hit a bunt back to Volstad which he smothered, and Jimmy was safe. After Victorino hit an infield single, Rollins scored on a single from Hunter Pence. Laynce Nix walked to load the bases with two outs, and Carlos Ruiz sent Shane and Hunter home with a single. Pete Orr added to the offense with an RBI double to right field. 4-0 Phillies.

Vance Worley was on fire tonight. Also, he was extremely lucky to make it out of a couple of innings in which he had runners in scoring position behind him. However, the Vanimal got into a bit of trouble in the seventh with the bases loaded. Geovany Soto grounded into a double play which allowed one run to score, and Vance got Reed Johnson to end the inning on a grounder to first. 4-1 Phils.

The speedy Tony Campana stole second base after walking, and Starlin Castro sent him home with an RBI single. Down 4-2 with a man on the basepaths, Bryan LaHair sent a ball over the right field wall, tying the ball game.

In the bottom of the eighth, Placido Polanco lined a two-run double which scored Juan Pierre and Jimmy Rollins. This was the game winning hit for the Phils as they took a 6-4 lead.

Jonathan Papelbon came in for the save and a save is what he would get. Phillies and Cubs went 2-2 this series.

The Phils will travel down to Georgia to face the Braves in a three-game series. Cole Hamels gets the start tomorrow at 7:10 against Brandon Beachy.