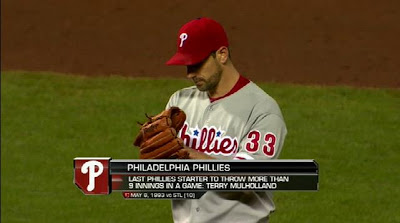 Read this line to yourself again after you read it the first time. It can't be real, right?

Say what?
Out of all the shocking stuff in there, the most disturbing is the last part. Cliff Lee got a no decision for that. Lee is 0-1, with a 1.96 ERA after that. In his loss, he was mediocre, in the other two starts though, he's given up ONE run in 16 innings, on a wild pitch, mind you. His team scored one run in those games too. In fact, in his three starts, they have scored three runs.
You can't win this way.
The Phillies have about four guys who are carrying close to their weight offensively, but none are characterized as on fire- Victorino, Pence, Rollins, and Ruiz. Then there's Galvis, who's actually hitting close to .400 after his 0-for-12 start in Pittsburgh, who I'd say is doing well enough as a rookie. Then there's the other three line-up spots- Polanco, first base, and left field. Polanco simply looks cooked, but honestly needs more time to play himself out of the job. First and left resemble musical chairs.
I would leave Galvis be until Utley can play, as I honestly believe he's better than all the other options at second, be it Orr, Martinez, Fontenot, or others. Polanco could be replaced later internally by either Wigginton, who's only not playing his way in defensively, or Galvis if he goes down and plays some third.
To me, you can't do much now with Polanco, and second is what it is.
Left and first are what bothers me. First, they kept the guy who clearly had the lesser spring (Pierre over Podsednik), then they gave that guy a lot of starts. Next they've jerked around the guy who seemed to play into the job last year (Mayberry), while leaving their top prospect (Brown) in the minors to play guys who have little future in the line-up (Nix and Pierre).
Finally, at first, they've got no clue- you have no idea if Thome, Mayberry, or Wigginton is going to play. How can any of them get hot when they're splitting time up? None of these guys can get going if they don't play.
My advice? Based on what they have right now, I would probably put Mayberry in left and put Thome at first as much as possible. I'm not sure there's a better option, and the only other acceptable one is to put Pierre in left full time, and Mayberry at first.
My hope is that in a month or two, Dom Brown will play into the left field job, and Mayberry can stay at first. In the meanwhile though, I'd settle on one pair for every game, and probably leave Wigginton and Nix on the bench as pinch-hitters. I love Wigginton's bat, but not his defense, so unless he takes the starting role at third, I'd leave him on the bench.
Remember here, there's 150 games to go. No freaking out yet. They're 5-7, not 2-10. I do believe there will be a resolution to the Utley situation by the month's end. A lot can, and will change by season's end. This team just needs to get in.
Topics
Uncategorized