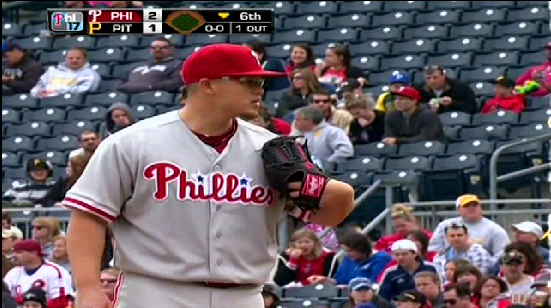 The Vanimal was unleashed this afternoon in Pittsburgh in the series finale of this opening series. Vance Worley hoped to hold down the fort while the Phillies offense could hopefully score more than one run against James McDonald and the Pirates. The Phillies haven't won a series at PNC Park since 2008. So, they were due to take a series.

Much like last night, Hunter Pence came through with an RBI in the first inning, providing offense early on. He drilled an RBI double to left field today to score Shane Victorino from second.

In the top of the fourth inning, Hunter came through again with an absolute rocket of a home run to left field. It was a solo home run and his first, as well as the Phillies' first home run of the season. 2-0 Phils.

Vance Worley served up a solo homer to Pedro Alvarez in the fifth inning. It was arguably more monstrous than Hunter's homer. But, it was only the fourth hit that Vance had allowed by that point.

After six strong innings and 78 pitches, Vance's afternoon was done. He allowed just five hits, he walked one, and struck out five.

Finally, we saw a burst of offense from the Phillies in the top of the seventh inning against Jared Hughes. After Ty Wigginton walked, Freddy Galvis made it to second on a sacrifice bunt which turned into an error on the second baseman. Juan Pierre came in after Brian Schneider lined out, and sliced a two-run single to right field, putting the Phils up 4-1.

Michael Stutes came in for the seventh. It wasn't pretty. After striking out Clint Barmes, Pedro Alvarez reached on an error by first baseman Ty Wigginton. Casey McGehee sent Alvarez home on a double to right-center, and Alex Presley sent McGehee home on an RBI single. Quickly, the Pirates only needed one more run to tie the game. However, they wouldn't get it.

Until the eighth inning, anyway. With Antonio Bastardo on the mound, Matt Hague singled to shallow left to score Andrew McCutchen from second base. Tied ball game.

Andrew McCutchen won the game for the Bucs in the bottom of the ninth. With David Herndon on the mound, Josh Harrison scored on a walk-off single from McCutchen. Pirates win, 5-4.

The Phillies are now 2-1 (everyone panic!) and will head home tonight for the home opener tomorrow against the Marlins. Cole Hamels vs. Anibal Sanchez @ 1:35.

Freddy Galvis saw a few major league firsts today. He reached second and third base for the first time, scored his first run, drew his first walk, and hit his first sac bunt. It was a good Easter Sunday for young Galvis.