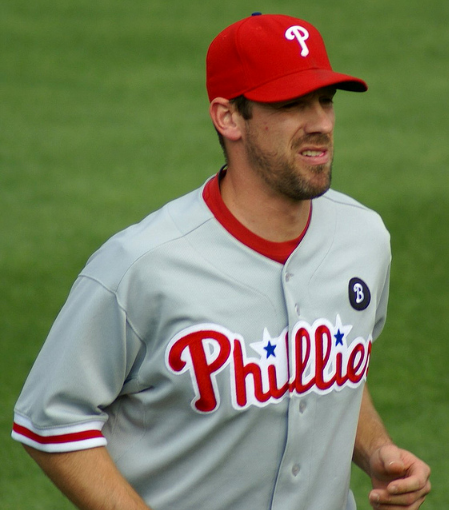 Cliff Lee was being squeezed tonight, no doubt about that. In his first start of the 2012 season, the Pirates were really testing him by taking tons of pitches, and having the strikezone to their advantage. The only change the Phillies made in their lineup tonight was putting Laynce Nix at first base instead of Ty Wigginton.

The Phillies scored first tonight in the top of the first inning. After Shane Victorino and Placido Polanco singled to get on base, Hunter Pence chopped an infield single to score Shane Victorino.

The Pirates wouldn't score a run until the sixth inning. Cliff Lee threw a wild pitch which allowed Pedro Alvarez to score. Oddly enough, it was Cliff's first wild pitch since 2010.

At 99 pitches after six innings, Cliff Lee's night was complete. He allowed just two hits, walked two, and struck out four. Off night for Cliff. Kyle Kendrick replaced him in the seventh inning and retired the side in a 1-2-3 inning. Yes, Kendrick.

Juan Pierre made his Phillies debut in the top of the eighth. He struck out against former IronPig Jason Grilli. Jeff Karstens, Tony Watson, and Grilli were silencing this Phillies offense which we haven't seen much of yet this season.

Chad Qualls pitched a scoreless eighth allowing just a double to left field. Jim Thome made his 2012 debut against Joel Hanrahan and struck out swinging. Regardless, the Phillies fans in Pittsburgh went nuts. The Phils had a chance to score in the top of the ninth with two men on, but Freddy Galvis struck out swinging. He's now 0-8.

Michael Stutes pitched 2/3 of the bottom of the ninth before giving way to Antonio Bastardo. Stutes allowed a single to McCutchen who later stole second base. After walking McLouth on four pitches, Antonio escaped the ninth inning with a pop-up to second base. To extra innings they go.

Just to make this game even more weird, Joe Blanton, the fifth starter, came into this game in the tenth and blew it. After allowing a double off the wall in center, Alex Presely hit an infield single to drive in the winning run, winning the ball game.

In an even series, Vance Worley will take the mound tomorrow afternoon at 1:35.