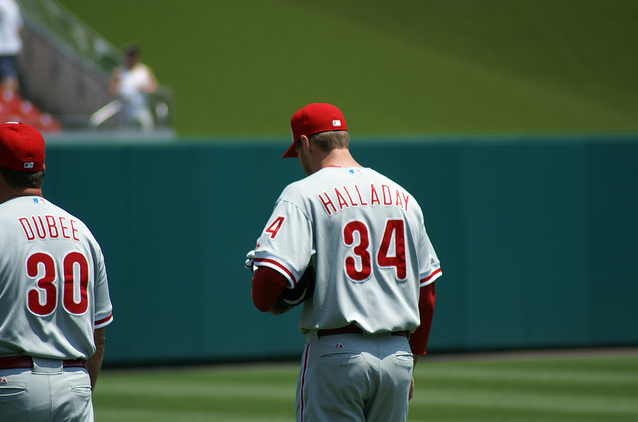 After coming off series loss to the New York Mets, the Phillies are hitting the West Coast for a 10-game road trip. Even though the Phillies lost the series against the Mets, they prevented the sweep as they routed the Mets to win 8-2. The Phillies are hoping that going West with that kind of momentum can jumpstart their season the right way.

Roy Halladay (2-0, 0.60 ERA) will attempt to give the Phillies that jumpstart as he makes his third start of the season. Doc has been nothing short of spectacular this season having won both of his starts, allowing just one earned run through 15 innings. In Halladay's last start, against the Marlins, he tossed seven strong innings, yielding five hits and one earned run which came in the second inning. Doc got the win, his second of the season, as his offense backed him up with 7 runs. In both of his starts, Doc had rocky first couple of innings, but as he settled in he attained dominance.

Halladay is making his fourth career start against the Giants. In three starts, he has an 0-2 record with a 7.23 ERA.

Doc will be taking on a Giant's lineup backed by the arm of Tim Lincecum (0-1, 12.91 ERA). Lincecum is coming off his shortest start of his career, a 76-pitch outing over 2 1/3 innings against the Colorado Rockies. Lincecum was shelled, allowing six earned runs on eight hits whilst waking two and striking out three. He avoided the loss, however in the 17-8 defeat. In 62 IP against the Phils, Lincecum has a 4-1 record with a 2.61 ERA.

These two Cy Young Award winners faced off against each other twice during the 2010 NLCS, but tonight is their first time meeting in a regular-season game. In the NLCS, Lincecum earned the win and Halladay took the loss in Game 1 of that series in 2010, but the tables turned in Game 5 with Halladay getting the win and Lincecum the loss.

The Phillies will need to keep on doing what they did yesterday: hit the ball. There's a short porch in right field and a deadly gap in right-center. As for Doc, he'll need to keep his pitch count down against a fine Giants' lineup. All together, the Giants have scored 43 runs and have hit 9 home runs. Compared to the Phillies 28 runs and 5 home runs, the Giants are not the same weak-offense team as before.

Juan Pierre is getting the start today, because unlike the rest of the Phillies who have a total .244 avg against Lincecum, he has faced him numerous times. Pierre is 6-12 (.500) with one double, two triples, three RBIs, and an OPS of 1.455. Good move by Charlie to start Frenchy.