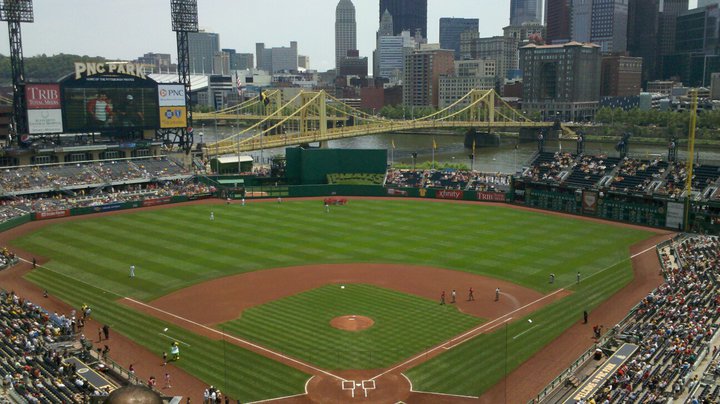 Philliedelphia/Frank Klose
It's been six long months. Six excruciating months filled with pessimism surrounded by injuries, optimism surrounded by new acquitations, and eagerness to get back on the field and go for it all once again. Today is Opening Day, the slate is clean, Spring Training stats don't matter, the pages have turned and the mindsets are focused on one thing and one thing only.

Today, Roy Halladay (2011: 19-6, 2.35 ERA) will lead the Phillies on their journey as they take on the Pittsburgh Pirates in his 10th straight Opening Day start, his third with the Phillies. Although Doc has not had a supreme Spring (1-2, 5.73 ERA), he isn't worried about a thing and neither should we. Halladay is everything we've expected him to be. A 20-game winner, a  Cy Young Award winner, a near repeat last season, and not to mention a perfect game and a no-hitter. In his career, Halladay 3-1 with a 1.18 ERA against the Pirates.

Opposing Halladay on the hill will be newly-acquired lefty Erik Bedard (2011: 5-9, 3.62 ERA). In December, Bedard signed a one-year, $4.5 MM contract with the Pirates. Bedard is making his third Opening Day start since 2008 as well as his National League debut. Having previously played his whole career in the American League (Baltimore Orioles, Seattle Mariners, and most recently the Boston Red Sox), Bedard is no stranger to the Phillies. In his career he has a 2-0 record with a 1.71 ERA.

Seems like a fair tale of the tape for the starters.

The Phillies will send out their lineup that does not include hyped-up Juan Pierre. Pierre may be in the starting lineup in the next couple of games, but John Mayberry Jr. has the nod in left field this afternoon. Jim Thome will also sit out today as Ty Wigginton mans first base. Other than the absences of Ryan Howard and Chase Utley, the Phils' lineup seems pretty solid. They'll just need to work on their small ball more than power hitting.

Fact: In five previous Opening Day matchups between the Phillies and Pirates, the Pirates have won all five of them.

You can watch the game on myPHL17.