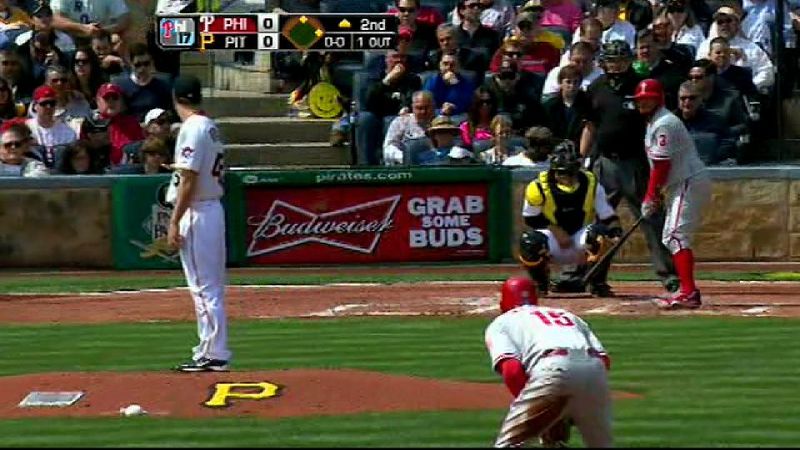 Happy Opening Day! The best day of the year for fans of baseball young and old. And what better way to kick off the 2012 season than with multiple pitcher's duels? Not only were the Phillies and Pirates held scoreless through six innings, but the Mets didn't score a run against Tommy Hanson of the Braves until the bottom of the sixth. Justin Verlander of the Detriot Tigers and Jon Lester of the Boston Red Sox were dueling in Detroit up until the seventh inning. In Chicago, Ryan Dempster and the young ace Stephen Strasburg battled a scoreless game until the fifth inning. Baseball!

Roy Halladay took the mound this afternoon in Pittsburgh for his 10th straight Opening Day start, 3rd straight as a Phillie. There's no better man to put on the mound for an occasion like this. This was also Jimmy Rollins' 12th straight start at shortstop on Opening Day.

As for the Philadelphia Phillies, Roy Halladay was pitching himself quite a game. Through the first six innings, he allowed just two hits, he hit one batter (McCutchen in the fourth), walked none, and struck out three.

Erik Bedard was battling this Phillies lineup and allowed four hits in six innings, holding the Phils scoreless with just one walk allowed and three strikeouts. A true pitcher's duel.

In the top of the seventh, the first run of the 2012 season for the Phillies was scored by first baseman Ty Wigginton. Carlos Ruiz had popped up a sacrifice fly to right field for his first RBI of the season.

It was made clear that Doc Halladay was winning this battle. With Chris Resop taking over for Erik Bedard in the eighth inning, Doc hit a single up to right field. The man does it all.

Clint Barmes took one for the team in the bottom of the eighth by staying in the path of a cutter from Doc. Doc didn't like this, and in return, struck out Nate McLouth to end the inning. He hadn't allowed a baserunner since he last hit McCutchen in the fourth, and he hadn't allowed a hit since the first inning.

After eight scoreless innings, Roy Halladay was done. His final line: 8 IP, 2 H, 0 ER, 0 BB, 5 K, 92 pitches. Jonathan Papelbon, our newly acquired closer, came in for the 9th inning, going for his first save as a Phillie, and he did just that, striking out Jose Tabata and getting Andrew McCutchen to ground out to end the ball game.

In his first major league game, Freddy Galvis went 0-4 with two double plays, a flyout, and a strikeout. This was a game to forget for the 22-year-old, but a game to remember for the the team as a whole. The Phillies win their first game of the season, 1-0. Halladay gets the win, Papelbon gets the save.

The Phils and Bucs have the day off tomorrow but will continue this series on Saturday with Cliff Lee on the mound for the Phillies.