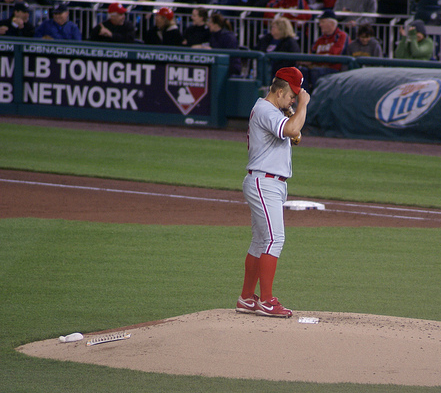 Joe Blanton was straight up phenomenal tonight. No doubt about that. Fortunately, the offense showed up tonight for the Phillies, and backed up Blanton in what was a fantastic game against the Cubs.

The only trouble that Joe Blanton put himself into tonight happened in the first inning. One run would score on an RBI double from Bryan LaHair.

Hunter Pence started off a fourth inning rally with a double down the left field line. He would later score along with Shane Victorino on a two-run single from Carlos Ruiz. With Laynce Nix on third, Carlos Ruiz on second, and Joe Blanton on first, Jimmy Rollins delivered a two-run double to right field, giving the Phils a 4-1 lead.

After that nightmare of an inning for Randy Wells, his night was done. He was replaced in the fifth inning by Michael Bowden. Speaking of replacements, Ty Wigginton would replace Jim Thome at first in the fifth inning after Thome experienced some lower back tightness. He's currently day-to-day.

Carlos Ruiz gave more life to this game in the sixth inning with a lead-off home run, making it 5-1. In the previous inning, Chooch was hit in the knee by a pitch from Blanton. He stayed down for a few moments before getting back into his position. Our catcher is a Panamanian rock.

Ty Wigginton extended his hit streak to 13 games in the seventh inning with a single to right field.

Chad Qualls came in with one out and allowed Tony Campana to score on a grounder from Castro which got the runner out at second. The run was charged to Blanton.

Jonathan Papelbon entered in the ninth inning and pitched a 1-2-3 inning, picking up the save. Phillies win, 5-2. Blanton receives the win.

Game three of four tomorrow at 1:35. Kyle Kendrick gets the start for the Phils.