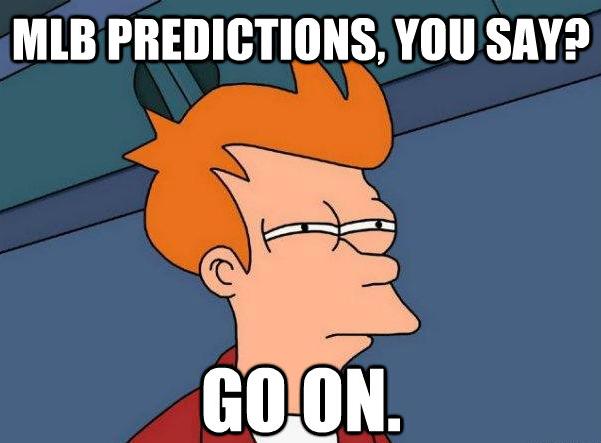 The 2012 team should be another year of exciting baseball. A lot of teams got better, which should help even the playing field and challenge the usual favorites like the Phillies, Yankees and Red Sox. Before you read the predictions below, I'll say that I am pretty cautious with my hopes for the Phillies this year. Like many others, I think injury and age may have caught up to them and this current team's window may still be open, but by the slimmest of margins. The NL East race should be a good one. On with the picks!

The American League is much stronger than the National League. A lot stronger. You could make the argument that the AL has four or even five teams stronger than any NL team from top to bottom. I like the Tigers over the Rangers in the AL Championship, breaking the hearts of Rangers fans everywhere once again.

Up until a few minutes before this post was submitted, I was ready to pick the Phillies to settle for a Wild Card spot. But the more I thought about it, the more I couldn't see any other team in this division winning more than the 92-93 wins I think the Phils will get this year. I like the up and coming Marlins and Nationals, but think they're both a year away from making any major noise. I like the Diamondbacks a lot and think they have great, young talent. It was incredibly difficult to pick a team to represent the NL in the World Series.

World Series champion and # of games – Tigers in 5 games

What date does Chase Utley return to the Phillies lineup (if at all) – June 4 vs. Dodgers

Which Phillies ace has most wins and how many – Cliff Lee, 20