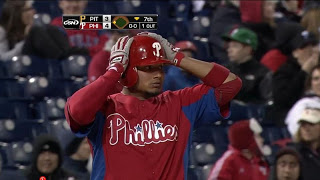 The Phillies play their last pre-season game tonight. I'll do another prediction if they don't announce the roster right away after. For now, this is it though:

When Contreras comes back in a week, I'd bet on Podsednik going down. I'd bet on Stutes knocking Herndon down as well- call me crazy. Martinez will eventually replace Orr, Utley replaces Galvis, and Howard…. I'm really not sure.
Topics
Uncategorized