Steve Trapani has provided some great photographs for Philliedelphia and will continue to do so.  Follow him on twitter at @trap_33. 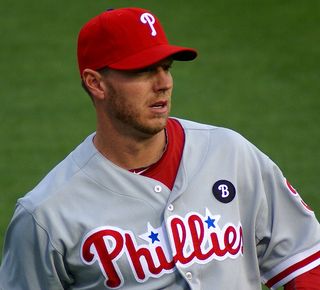 Twenty Four short hours from now the Phillies will open the 2012 season at PNC Park in Pittsburgh. With optimisum having slipped just a tad in the last few weeks by some fans with word that the team will start the season without both Ryan Howard and Chase Utley,  I have to say that mine is still sort of high. With opening day starter Roy Halladay, Cliff Lee and Cole Hamels I still feel like the Phillies are the class of the division. While That may totally be A false sense of thinking, I just dont see them being as poor as some so called experts are making them out to be. Yes without Utley and Howard the offense may suffer a little but with guys like Rollins, Victorino, Pence, and even Juan Pierre (yes I said Pierre) the Phillies offense will still be able to put up runs to support the starting pitchers.

While the Phillies will have some heat in the division from the Braves and I believe the Marlins will also be up there. I still see the Phillies coming out on top come October. If no more serious injuries happen and both Howard and Utley can make it back for at least the second half of the season the Phillies should be prime for a run at not only thier 6th straight division title but a World Series Championship.  Ahh the joys of a new season. The optimisum of every teams fans, the smell of the ballpark, the shine of the crisp green outfield grass as the stadium lights glimmer from high above. The sound of the bat hitting a 90MPH pitch. The sound of the catchers glove as he catches strike three. All things I love about baseball, all things I love about the Phillies. All things that make this sport so great.

So here is to another season of hope, joy, taking over Nationals Park, and pure excitment for Phillies fans of all ages.