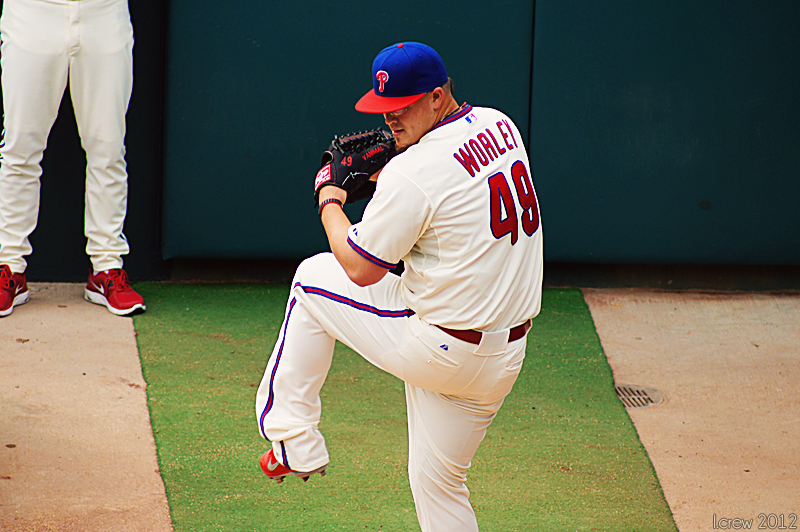 The Phillies went from hitting the crap out of the ball, to not seeing it at all. This series with Chicago has literally been a roller coaster series. With the Phils dropping the third game yesterday, they fell to 1-2 against the Cubs and tonight they'll turn to Vance Worley in effort to seal a series split in this wraparound series.

Vance Worley (2-1, 2.16 ERA) will make his fifth start of the season tonight as he takes on the Cubs. In Worley's last outing, he powered through an Arizona lineup allowing one earned run on five hits over six innings to earn the win. Worley had been coming off a seven-inning winning effort where he reached a career-high 11 strike outs against the Padres. The Vanimal has been surely effective this season and although the 24 year-old is just getting started this season, he has shown that his rookie season was legit. In one career start, Worley is 1-0 with a 1.13 ERA against the Cubbies.

The Cubs will send out the struggling Chris Volstadt (0-3, 6.14 ERA) as they aim to take a series victory in Philly. Volstadt was roughed up in his last start as he allowed four earned runs on six hits over 6 innings against the Cardinals. Volstadt wasn't supposed to start tonight, but the Cubs decided to give Jeff Samardzija an extra day off. Like Malholm, Volstadt has not yet made a strong start until facing the Phils. Not saying that Volstadt will, it's important that the Phillies jump on him early. He is 2-5 with a 5.88 ERA in over 60 innings of work against the Phils.

The story was really too good!