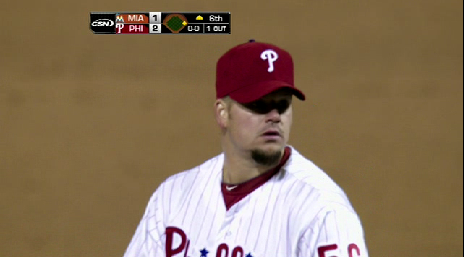 Incoincidentally, Joe Blanton started his first game of the season on the first Dollar Dog Night at Citizens Bank Park! (That was my first and last fat joke, I promise.) Mark Buehrle got the start for Miami tonight.

Joe Blanton was breezing through this Marlins lineup tonight. In his career, he is 6-2 with a 3.33 ERA against the Fish. Buehrle is 3-0 against the Phillies dating back to a win he picked up at Veterans Stadium.

The first run of tonight's game came in the fourth inning via solo home run from Shane Victorino, his first dinger of the year. Later in the inning, Hunter Pence scored on an RBI single to left field from John Mayberry Jr. Jimmy Rollins had a chance to score on a double from Pence earlier in the inning, but was tagged out at home by Marlins catcher John Buck.

In the top of the fifth, John Buck doubled to right field on a Hunter Pence error which scored Omar Infante from second. It would be the only run that Blanton would allow thanks to stellar pitching and even more stellar defense behind him in the infield.

Joe Blanton was taken out after a very impressive seven innings. His final line: 3 H, 1 R, 1 BB, 3 K, 85 pitches. Anyone see that coming?

Ty Wigginton led off the bottom of the seventh with a solo homer to left field, his first of the year. This put the Phillies up 3-1.

Chad Qualls came in for the eighth inning and made it out of a jam with two men on, two outs, and Giancarlo Stanton up to bat. Stanton struck swinging out to end the inning and the Marlins' chance of battling back from a 3-1 deficit.

Jonathan Papelbon also got into a bit of trouble, but ended the ninth inning on a double play. He picked up his first save at home as a Phillie. The Phillies took two of three from the Fish, and are back to .500 baseball.

Tomorrow night, the Mets and Phillies will start a three-game series at home with Cliff Lee on the mound for the Phils.