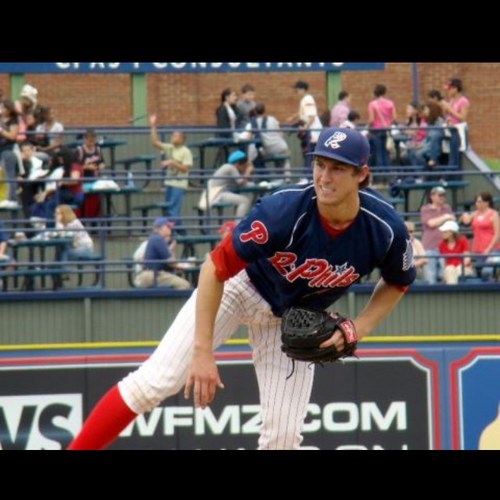 I recently got the opportunity to interview 21-year-old starting pitcher Jon Pettibone. Pettibone was drafted by the Phillies in the third round of the 2008 MLB Amateur Draft. He now pitches in AA Reading and has a 3-4 record with a 3.59 ERA. In 52 innings he has allowed 62 hits, 21 earned runs and 18 walks while striking out 33.

1) Who did you admire most in baseball while growing up?

2) What was it like being only 17 and already with the GCL Phillies?

It was tough leaving So Cal going cross country and being on my own, but at the same time it was a learning experience and made you grow up rather quickly.

3) How bittersweet was it to win the SAL Championship in just your third year in baseball?

It was an awesome experience to cap off a successful season and got a pretty sweet ring out of it, too.

4) Who would you least likely want to face on the 2012 Reading Phils team?

5) How would you rate the success of the R-Phils team this year?

Good. We've been in and out of first place with the New Britain Rock Cats. We started extremely hot but since cooled off a bit but still playing solid baseball.

7) What's one thing that your fans don't know about you?

Well one, I played high school basketball and was named co-MVP my senior year, and also my dad played in the big leagues with the Minnesota Twins.

8) If you hadn't pursued your pitching career, what would you be doing right now?

I really would not know, baseball has been my life for many, many years so it would be crazy to think about life without it. At the same time I am very thankful for the chance I have to be doing what I love.

9) Which major league team would you least likely want to face right now?

Probably those Texas Rangers. Seems like that whole team can hit for power including that Josh Hamiliton guy.

10) Are you working on certain pitches right now or do you stick with a select few?

Mostly a select few (fastball, slider, change up). I'm sure as I get older I will begin to develop more of an arsenal.