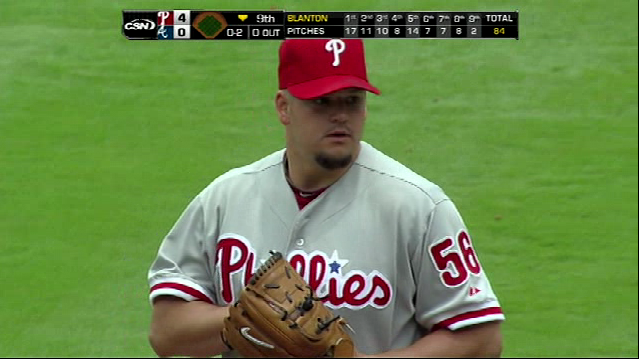 Whaaaaat is going on?

Just about a dozen hours after the Phillies and ace Roy Halladay turned out a huge clunker, fifth starter Joe Blanton came out and gave the Phillies one of the best pitching performances by any Phillie this season as the Phillies took down the Atlanta Braves 4-0.

In a game that took only a little more than two hours, Blanton and Braves starter Randall Delgado were both tremendous.  Delgado went 8 innings, allowing just two runs.

The Phillies got their first run in the first after Jimmy Rollins and Juan Pierre opened the game with signles.   Rollins advanced to third on Shane Victorino fly out, and Hunter Pence hit a sacrifice fly to bring home Rollins.

The Phillies second run came on a Laynce Nix solo home run in the seventh inning.

Finally, in the top of the 9th as Livan Hernandez (who could not make the Houston Astros but yet made the Braves somehow) came in, Shane Victorino hit a two-run bomb to right field, his first home run as a left-handed hitter to make it 4-0.

Blanton got the final three outs the bottom of the ninth to be the first Phillies complete game shut out of the year.