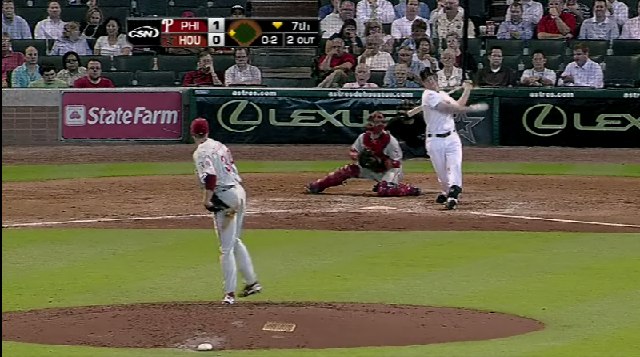 Roy Halladay has been placed on the DL later and Erik Kratz has taken his roster spot. Carlos Ruiz is available for tonight and the lineup card seemed to reveal (and now confirmed) that Doc will be headed to the DL.  Todd Zolecki reports that it is a grade 1- grade 2 strain in his lat and will be out 6-8 weeks.

Sounds like we were on the right track with this one.

Halladay left Sunday's game after just two innings with a sore right shoulder. He allowed four earned runs on a grand slam home run by Yadier Molina. Originally called "precautionary", it seems likely that Doc has been pitching like this for quite some time. I've had a feeling that a 4-5 record and a 3.98 ERA wasn't all old-age and just Doc "wearing down".

If that's the case, then either the Phillies were desperate or Doc is a quiet fellow.

Personally, I think Halladay needs a rest right now. It's early in the season and having your team's best pitcher on the DL is no good sign. It's good that he gets some rest and is shut down for a period of time.