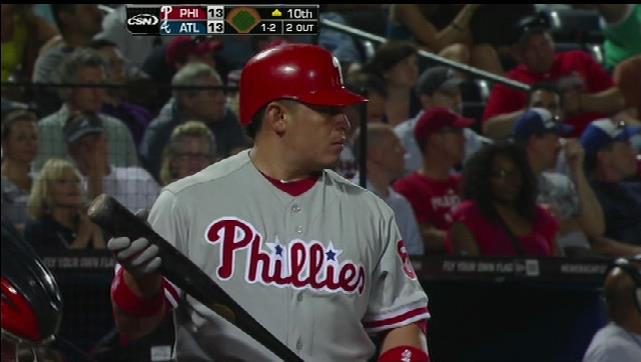 The Phillies were playing excellent baseball against the sluggish Tommy Hansen. They were really making him work, and were working his count up higher than Tommy would have liked. In the top of the third, Shane Victorino hit an RBI single, scoring Jimmy Rollins. After Hunter Pence walked, the bases were loaded with Polanco over at third. Laynce Nix delivered a bases clearing double, putting the Phillies up 4-0.

This is where it gets ugly. Doc gave up three straight singles to start the bottom of the fifth. He recorded one out before giving up two more singles, making it 6-2. With one remarkably awful pitch and one mighty powerful swing from Brian McCann, everyone was sent home on a grand slam to right field. It was the fourth grand slam Roy Halladay has given up in his entire career. Tied game.

In the bottom of the sixth, Doc allowed a single and a double before Jason Heyward hit a two-run single, putting the Braves up 8-6. At this point, Roy Halladay was clearly in no shape to continue. Joe Savery came in and finished the inning for him.

Doc was in a terrible condition by the fifth inning tonight. With the heat and humidity, he was quite literally dripping in sweat, and frequently had to remove his cap, wipe his brow, loosen his jersey, etc. We saw this happen last year against the Cubs when Roy was also taken out early due to fatigue. His final line from tonight (brace yourself): 5.1 IP, 12 H, 8 ER, 0 BB, 5 K, 93 pitches (69 for strikes).

In the top of the seventh with two men on, Carlos Ruiz sent a baseball into the seats in left field, putting the Phillies up 9-8. Unbelievable offense tonight, especially from Chooch.

Antonio Bastardo stated he wanted to pitch more, and that's what he would do in this game. He pitched a 1-2-3 perfect seventh inning.

Carlos Ruiz kicked some more butt in the eighth inning; he cleared the bases on a double to the corner of right field, giving the Phillies a 12-8 lead. By the way, Chooch is now the team's RBI leader with 17 (7 tonight). He's also hitting .333.

Jose Contreras came in for the eighth inning and didn't have as much luck as Antonio Bastardo. Tyler Pastornicky scored Dan Uggla with an RBI single before Jason Heyward walked to load the bases. Michael Schwimer came in to replace Contreras and somehow made matters worse.

Shane Victorino beat out an infield single in the ninth inning, scoring Juan Pierre from third, tying the ball game at 13.

In the bottom of the ninth with recent call-up Brian Sanches on the mound, the Braves loaded the bases but would make nothing of it, putting the game into extras. He also pitched a scoreless tenth before Chipper Jones took him deep with Dan Uggle on base in the 11th, winning the ball game 15-13.

Tomorrow's series finale will be at 12:10 in the afternoon, Joe Blanton takes the hill for the Phillies.