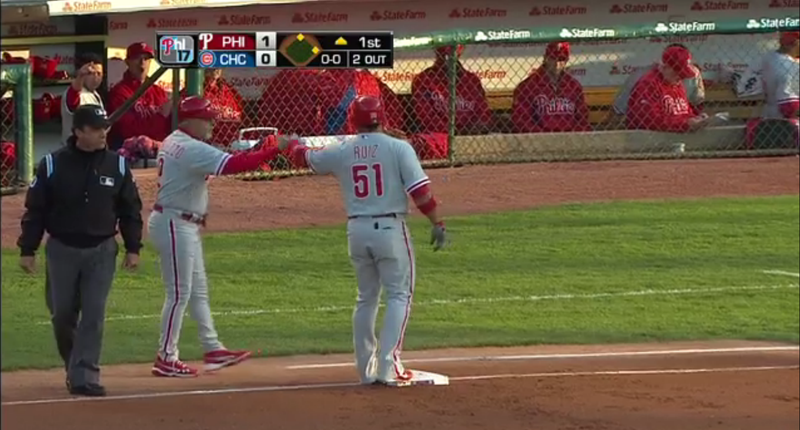 Finally, a win for Roy Halladay. Doc pitched a masterpiece tonight at Wrigley and received run support, which is a rarity of late for this team. After five straight starts without a win, Roy picked up his fourth of the season in the Phillies' fifth consecutive win.

Chris Volstad has never been lucky against the Phillies. In his career, he is 2-5 with a 5.89 ERA against them. He is 0-5 this year with a 6.92 ERA. Those stats changed for the worse after his two-inning effort tonight.

Carlos Ruiz would drive in the first run of the game tonight with a single to center which scored Jimmy Rollins. It was Chooch's 25th RBI.

The only trouble Doc ran into tonight occurred in the bottom of the first. With David Dejesus on third, Starlin Castro sent him home with a sacrifice fly. 1-1 ball game.

In the top of the second inning, the bases were loaded with one out for Shane Victorino. Shane grounded out to score Roy Halladay from third. Hunter Pence followed with a two-run single up the middle, giving the Phils a 4-1 lead.

Chris Volstad was taken out after this inning. His ERA on the season is now 7.46.

Chooch came through again with another RBI. In the fifth, Pence doubled to left field and was sent home by a single from Ruiz. 5-1 Phils.

After a wonderful (and super adorable) duo rendition of "Take Me Out to the Ball Game" by Gary Matthews and his grandson, Starlin Castro led off the bottom of the seventh with a solo homer to left field. 5-2 Phillies.

Blake Parker entered this game in relief of Casey Coleman in the seventh inning. He pitched a scoreless seventh, but made an error in the eighth which allowed two runs to score. Hunter Pence reached on an infield single when Parker threw past the first baseman. 7-2.

No surprise here, Carlos Ruiz drove in another run. Hunter Pence was able to score on an RBI double from Chooch. It was Chooch's fourth hit of the night, and third RBI (27 total).

Welington Castillo led hit a solo home run in the bottom of the eighth to lead of the inning. Doc was not happy at all, which we saw as has slammed down his rosin bag.

Jonathan Papelbon would come in with two outs in the ninth and allow Castillo to score on an RBI single from Darwin Barney. He got Reed Johnson to ground out, ending the game.

The Phillies are now one game over .500, and have a winning record for the first time since Opening Day in Pittsburgh. They'll head home tonight and have a six-game home stand coming up with the Red Sox and Nationals. Cole Hamels takes the mound tomorrow night against Josh Bard.